The chemical element cadmium is classed as a transition metal. It was discovered in 1817 by Friedrich Stromeyer.

A small ball of cadmium metal, with a coin for size reference.

Friedrich Stromeyer, who discovered cadmium in 1817.

Cadmium was discovered by German chemist Friedrich Stromeyer in 1817 as an impurity in zinc oxide. (1)

Stromeyer made his discovery after a request from the government to inspect the pharmacies in the town of Hildesheim, Germany.

In those days zinc oxide was used, as it still is, to treat skin conditions. For some reason, Hildesheim’s pharmacies were selling zinc carbonate rather than the usual zinc oxide.

Stromeyer was aware that heating zinc carbonate until it was red hot would convert it to the oxide. He did this with samples from the pharmacies. He found that the brilliant white carbonate turned into an oxide which ought to have been white, but was in fact yellow/orange.

Normally this color would suggest iron or lead contamination, but Stromeyer could not find any trace of these elements.

He visited the factory in Salzgitter where the pharmacies had bought the zinc carbonate. He asked why they were selling zinc carbonate instead of the usual oxide.

The manager explained to him that their zinc carbonate was the expected color – white – and it was easy to sell.

When they tried to convert the carbonate to the oxide by heating, it always turned yellow. Since zinc oxide ought to be white, they could not sell it. They had analyzed it carefully for iron contamination, but could find none.

Stromeyer then decided he would analyze this yellow zinc oxide carefully himself. He found the yellow color was caused by “the presence of a peculiar metallic oxide, the existence of which had not hitherto been suspected.”

He extracted this new metal oxide from the zinc oxide and then reduced it to isolate the world’s first ever cadmium metal. He likened its appearance to platinum’s and measured its density as 8.75 g/cm3 – very close to today’s accepted value.

He estimated that the new metal was present at between 0.1% and 1% in zinc and its compounds, from which he was able to isolate 3 grams of pure cadmium metal.

Stromeyer suggested the name of cadmium after ‘cadmia,’ the Latin name for calamine. Calamine is an old name for a zinc ore.

Cadmium was independently discovered by German chemist Karl Hermann in 1818. Hermann had noticed an unexpected yellow color in zinc sulfide. The yellow was assumed to be from arsenic impurities, but Hermann realized that it was actually due to a previously unknown element. (2)

Cadmium telluride is used to make thin film solar cells, which can absorb more than 90% of visible light. Image: NREL 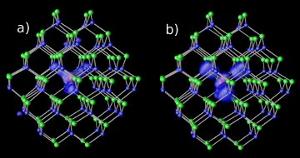 Cadmium and its compounds are highly toxic.

Cadmium is a soft, malleable, ductile, bluish-white metal, which is easily cut with a knife. It is an excellent electrical conductor and shows good resistance to corrosion and attack by chemicals.

It is similar in many respects to zinc in its chemical properties.

Cadmium tarnishes in air and is soluble in acids but not in alkalis.

As a result of its low coefficient of friction and its high fatigue resistance, cadmium is used in alloys for bearings. Cadmium is used in low melting alloys and is a component of many kinds of solder. It is also is used in electroplating.

Cadmium and tellurium can be compounded into CdTe thin-film photovoltaic modules whose physical characteristics are ideal for solar cell production. They are relatively low cost and have an almost perfect bandgap for solar energy harvesting.

Abundance solar system: 6 parts per billion by weight, 70 parts per trillion by moles

Source: Cadmium most often occurs in small quantities associated with zinc ores, such as sphalerite (ZnS). Greenockite (CdS) is the only cadmium mineral of any consequence. Almost all cadmium is obtained as a by-product of zinc, copper, and lead ore refining operations.