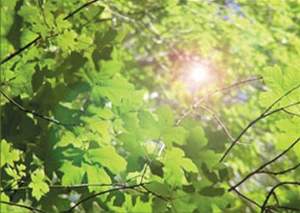 Without manganese, this picture would not exist. In fact, there would be no advanced life forms on our planet. Manganese is essential for photosynthesis.

Cave paintings, 16,000 years old, in Lascaux, France. The black color was made by our ancestors using manganese dioxide.

Manganese compounds have been used since ancient times.

In the first century AD, Pliny the Elder, the Roman author, described how black powder (manganese dioxide) was used to manufacture colorless glass. (1) It is still used for the same purpose today.

The first recognition of manganese’s existence as a distinct element was in 1740, when the German chemist Johann Heinrich Pott stated that pyrolusite (manganese dioxide) contained a new earth metal. Until then pyrolusite was believed to have been a compound of iron.

The color changes he observed in the product were green/blue/red/green, establishing that pyrolusite did not contain iron. (2),(2.1),(3)

Details of the first isolation of metallic manganese were published in 1770 by Ignatius Gottfried Kaim in a dissertation under the supervision of the chemist Jakab Jozsef Winterl.

Working in Vienna, Kaim mixed powdered pyrolusite with twice its weight of black flux and heated the mixture strongly. The composition of Kaim’s flux is uncertain, although it was probably based on charcoal. (A flux is a reducing agent.) If so, the reaction would have been:

Kaim described the product of the reaction as a blue-whitish shiny brittle metal with many differently shaped facets. When broken and viewed side-on, he observed blue flecks.

Kaim claimed that no iron was present in his product, but he was aware his manganese was not pure.

He invited other chemists to find a flux that could produce the pure metal. (4), (5)

In Sweden, Carl Wilhelm Scheele – the discoverer of chlorine and one of oxygen‘s independent discoverers – was aware that pyrolusite contained a new element. His attempts to isolate it failed and he asked his friend Johan Gottlieb Gahn to try.

Gahn used a similar method to the one Kaim had used a few years earlier, with charcoal as the reducing agent. Gahn used a blowpipe to increase the temperature of the reaction.

The metal he produced was white, hard and brittle; when broken it had a granular structure. Gahn’s manganese was also impure, but the new metallic element now gained widespread recognition. (2)

Manganese’s name comes from the use of its compounds in glass-making. These compounds were called ‘magnes’ in Latin, meaning ‘magnet.’ (6)

Manganese is not actually magnetic!

Colors on opposite sides of the color wheel cancel.

Ever wondered how drink cans can be so thin? Manganese stiffens aluminum, so less of it is needed to make soft drink cans.

Transition metals are well-known for their multiple colored ions. Watch the changes in color as manganese changes its oxidation state from +7 to +6 to +4.

Excess manganese, particularly inhalation of the powder/dust, is toxic. Exposure to manganese or manganese oxide(s) dust can result in a medical condition called manganism; symptoms resemble those of Parkinson’s disease. Workers at particular risk of exposure include miners and welders.

Manganese is a gray-white, hard, brittle, metal that can take a high polish. It is not magnetic. The metal tarnishes on exposure to air and, when heated, oxidizes to manganese(II, III) oxide (Mn3O4).

Like other transition metals, manganese has more than one common oxidation state. The most stable is +2, which is a pale pink color in aqueous solutions. Also important is +4, brown/black, which is found in manganese dioxide; and +7 found in the purple permanganate anion MnO4–. Manganese’s +6 oxidation state is green.

For over 2000 years manganese dioxide has been used to make colorless glass. Glass is made from sand (silica) and most sand contains iron (II) oxide, which naturally gives glass a green color. It is sometimes incorrectly stated that the manganese dioxide oxidizes the iron (II) oxide to iron (III) oxide; with a corresponding color change from intense green to pale yellow – and the pale yellow is too faint to be seen.

In fact, the real reason the glass decolorizes is complementary colors. Colors that are directly opposite one another on the color wheel (image: left) cancel one another out, to leave a pale gray.

In glass the manganese dioxide forms a violet silicate which cancels the green color of Iron (II). (9)

Manganese dioxide is also used as a black-brown pigment in paint and as a filler in dry cell batteries.

The great majority of manganese ore ends up in steel production where the manganese desulfurizes and deoxidizes the steel.

It is also is used extensively to produce a variety of important alloys. For example, the aluminum used to make most soft drinks cans contains about 1% manganese to improve the cans’ stiffness and corrosion resistance.

Organo-manganese compounds can be added to gasoline to increase its octane rating and reduce engine knock.

Manganese is the twelfth most abundant element in the earth’s crust and it is an essential trace element for all life on earth.

In the human body several manganese-containing enzymes are need to metabolize carbohydrates, cholesterol, and amino acids. Typically our bodies have about 10 – 20 mg manganese. This needs to be topped up frequently because our bodies cannot store it. About a quarter of the manganese in our bodies is in bone, while the rest is evenly distributed through our tissues. (10)

Abundance earth’s crust: 0.1% by weight, 360 parts per million by moles

Source: Manganese occurs mainly as the mineral pyrolusite (MnO2) and as rhodochrosite (MnCO3). Manganese can be found in manganese nodules on the ocean floor, but these are currently commercially unviable. Commercially, manganese is produced by reduction of its ores using aluminum. High purity manganese is made by electrolysis of manganese sulfate in solution.

Isotopes: Manganese has 21 isotopes whose half-lives are known, with mass numbers 46 to 66. Naturally occurring manganese consists of its one stable isotope, 55Mn.