The chemical element cerium is classed as a lanthanide and rare earth metal. It was discovered in 1803 by Jacob Berzelius and Wilhelm von Hisinger and independently in the same year by Martin Klaproth. 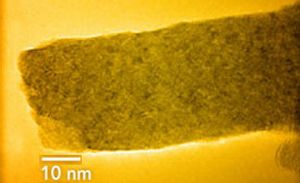 Cerium was discovered in 1803 by Jacob Berzelius and Wilhelm von Hisinger in Sweden, and independently in the same year by Martin Klaproth in Germany.

Berzelius and Hisinger discovered the new element in a rare reddish-brown mineral now known as cerite, a cerium-lanthanide silicate. (1), (2)

Berzelius and Hisinger prepared cerium salts from cerite and investigated their chemical reactions. Although they could not isolate the pure metal, they found that cerium had two oxidation states: one yielding colorless salts, the other yellow-red ones. (1), (3)

They named the new element cerium after the asteroid Ceres, which had been discovered just two years earlier by Giuseppe Piazzi. They called cerium oxide ‘ceria.’

Klaproth’s analysis of the mineral also indicated that it contained the oxide of a new element. He named the oxide ockroite after its yellowish red color. (1), (3)

Berzelius and Hisinger published their results before Klaproth and the name cerium was accepted for the new metal.

Berzelius and Klaproth are major figures in the history of chemistry. In addition to their other achievements Berzelius discovered selenium in 1817 and thorium in 1828 while in 1789 Klaproth discovered both uranium and zirconium.

Carl G. Mosander, who worked closely with Berzelius, prepared metallic cerium in 1825. First he reacted cerium sulfide with chlorine, yielding anhydrous cerium chloride. He reduced the chloride with potassium, forming potassium chloride and metallic cerium. He burnished the resulting brown powder to obtain a gray material with a dull metallic luster – cerium, although rather impure. (3a), (4)

Mosander’s isolation of cerium from its chloride using potassium was similar to the approach used by Ørsted to isolate aluminum in 1825. Subsequently Wöhler and Bussy used this method to isolate beryllium in 1828 and in the same year Berzelius used it to isolate thorium.

Mosander continued to investigate cerite chemistry and in 1839 he discovered the new element lanthanum, which is also present in cerite.

Mischmetal is an alloy of cerium and lanthanum, with small amounts of neodymium and praseodymium. photo:Spypredator.

Researchers in Argonne’s Chemical Engineering Division have developed a catalyst that could help diesel truck manufacturers eliminate harmful nitrogen-oxide (NOx) emissions from diesel exhausts. The beaker of blue catalyst material is ‘Cu-ZSM-5’, a zeolite with copper ions attached within its micropore structure and an external coating of cerium oxide. photo: Argonne National Lab.

Cerium is considered to be moderately toxic.

Cerium is a reactive, soft, gray, lustrous metal that is malleable and ductile.

The metal tarnishes in moist air and reacts with water to form cerium hydroxide plus hydrogen gas.

Small particles of the metal may ignite if a knife scratches the pure metal surface.

It is attacked by alkali solutions and all acids.

Cerium has a variable electronic structure: the energy of the inner 4f level is nearly the same as that of the 6s level, allowing variable occupancy of these two levels.

An alloy of cerium and lanthanum, with small amounts of neodymium and praseodymium (misch metal) combined with iron oxide and magnesium oxide is used as the flint in cigarette and gas lighters.

Cerium is used in carbon-arc lighting, especially in the motion picture industry. It is also used in phosphors for color television screens and fluorescent lighting.

Cerium oxide is used as a catalytic converter to reduce carbon monoxide emissions in the exhaust fumes from automobiles. Cerium oxide, as a nanopowder, is added to diesel fuel to reduce sooty fumes and improve engine performance. It is used in the walls of self-cleaning ovens and is also used to polish glass surfaces.

Flammacerium (cerium nitrate-silver sulphadiazine) is a cream to treat and prevent infections in extensive burn wounds. The cerium nitrate component reduces the occurrence of immunosuppression. (5)

Abundance solar system: 4 parts per billion by weight, 30 parts per trillion by moles

Source: Cerium is the most abundant of the lanthanides. It is not found free in nature but is found in a number of minerals, mainly allanite, bastnasite and monazite. Commercially, cerium is prepared by electrolysis of the chloride or by reduction of the fused fluoride with calcium.