The chemical element beryllium is classed as an an alkali earth metal. Pure beryllium was discovered in 1828 by Friederich Wöhler and Antoine Bussy. 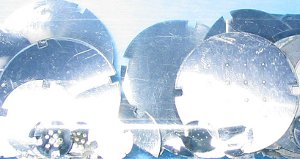 Three varieties of beryl (left) and an emerald (right). Beryl and emerald’s formula is Be3Al2(SiO3)6. The different colors are caused by traces of different elements. For example, emeralds are colored by traces of chromium 3+ (blue-green) or vanadium 3+ (yellow-green) ions. (5) Images from Reno Chris and Jan Arkesteijn.

The hexagonal crystal structure of BeO (beryllium oxide). Study of crystals of beryl and emerald provided a clue to the existence of the new element beryllium. Image from Solid State

In 1798, in France, René Haüy saw similarities in the crystal structures and properties of beryl and emerald. Beryl can appear in a number of different colors. Emerald is green. (See images on left.)

Haüy wondered if, despite their different colors, beryl and emerald could be made of the same elements. He approached Nicolas Louis Vauquelin, a French chemist who specialized in analysis, and asked him to have a look. (1)

Vauquelin discovered a new, sweet-tasting substance in both emerald and beryl. We now call this substance beryllia, BeO. Despite its sweet taste, we now know that beryllium and its compounds are highly toxic.

Although frowned upon today, old style chemists often tasted chemicals as part of their analyses.

For some, the taste test put their careers into terminal decline. One such chemist was Karl Scheele from Sweden, who discovered chlorine and oxygen. Scheele is believed to have died from poisoning caused by a variety of his experiments.

The sweet taste of the salts then led to the new element being renamed ‘glyceynum,’ then ‘glucina’ or ‘glucine.’ The Greek ‘glykis’ means ‘sweet’ and is the source of our word ‘glucose.’ (1), (3)

Pure beryllium was first isolated from its salts in 1828 by Friederich Wöhler in Germany and, independently, Antoine Bussy in France.

Wöhler was unhappy with the name the new element had been given, preferring beryllium from the Greek word ‘beryllos,’ meaning the mineral beryl.

Wöhler’s countryman, Martin Klaproth, had already pointed out in 1801 that yttria also forms sweet salts. A name derived from ‘beryllos’ would be less likely to cause confusion than one derived from ‘glykis.’ Klaproth also noted that a genus of plants was already called glucine. (4)

Bussy, however, preferred to call the new element ‘glucinium.’

Finally, in 1949, IUPAC chose beryllium as the element’s name and this decision became official in 1957. (2)

Beryllium played a large part in proving the existence of neutrons. In 1932, James Chadwick, an English physicist, bombarded a sample of beryllium with alpha-rays (helium nuclei). He observed that the bombarded sample emitted a subatomic particle, which had mass but no charge.

This neutral particle was the neutron.

Beryllium and its salts are both toxic and carcinogenic.

Beryllium is light, silver-gray, relatively soft metal that is strong but brittle.

Under normal conditions, a thin layer of the hard oxide BeO forms on beryllium’s surface, protecting the metal from further attack by water or air.

As a result of this BeO layer, beryllium does not oxidize in air even at 600oC and it resists corrosion by concentrated nitric acid.

Beryllium also has high thermal conductivity and is nonmagnetic

Unlike most metals, beryllium is virtually transparent to x-rays and hence it is used in radiation windows for x-ray tubes.

Beryllium alloys are used in the aerospace industry as light-weight materials for high performance aircraft, satellites and spacecraft.

Beryllium is used as an alloy with copper to make spark-proof tools.

Beryllium is also used in nuclear reactors as a reflector and absorber of neutrons, a shield and a moderator.

Source: The mineral beryl, Be3Al2(SiO3)6 is the most important source of beryllium.
Commercially it is produced by the reduction of the fluoride with magnesium metal.

Isotopes: Beryllium has nine isotopes with known half-lives. 9Be is the only stable isotope.
Cosmogenic 10Be (half-life 1.51 million years) is produced in the atmosphere by the impact of cosmic rays on oxygen and nitrogen.