The chemical element oxygen is classed as a chalcogen gas and a nonmetal. It was discovered in 1774 by Joseph Priestley and and two years earlier, but unpublished, by Carl W. Scheele.

The chemistry of respiration: Antoine Lavoisier carries out an experiment to study the oxygen content of air exhaled from a man’s lungs. Lavoisier’s wife Marie-Anne makes notes. She also created the engraving from which this image was taken. 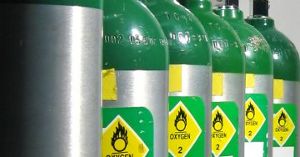 Oxygen was discovered in 1774 by Joseph Priestley in England and two years earlier, but unpublished, by Carl W. Scheele in Sweden.

Priestley heated mercury oxide, focusing sunlight using a 12-inch ‘burning lens’ – a very large magnifying glass – to bring the oxide to a high temperature. Priestley’s lens was smaller than the enormous one used by Antoine Lavoisier in his investigation of carbon. (Shown on Chemicool’s carbon page.)

Totally unexpectedly, the hot mercury oxide yielded a gas that made a candle burn five times faster than normal. Priestley wrote: “But what surprised me more than I can well express was that a candle burned in this air with a remarkably vigorous flame. I was utterly at a loss how to account for it.” (1)

In addition to noticing the effect of oxygen on combustion, Priestley later noted the new gas’s biological role. He placed a mouse in a jar of oxygen, expecting it would survive for 15 minutes maximum before it suffocated. Instead, the mouse survived for a whole hour and was none the worse for it.(2)

Antoine Lavoisier carried out similar experiments to Priestley’s and added to our knowledge enormously by discovering that air contains about 20 percent oxygen and that when any substance burns, it actually combines chemically with oxygen.

In addition to these achievements, it was Lavoisier who first gave the element its name oxygen. (2)

The word oxygen is derived from the Greek words ‘oxys’ meaning acid and ‘genes’ meaning forming.

Before it was discovered and isolated, a number of scientists had recognized the existence of a substance with the properties of oxygen:

In the early 1500s Leonardo da Vinci observed that a fraction of air is consumed in respiration and combustion.(3)

In 1668 John Mayow wrote that air contains the gas oxygen [he called it nitroarial spirit], which is consumed in respiration and burning.(3),(4)

Mayow observed that: substances do not burn in air from which oxygen is absent; oxygen is present in the acid part of potassium nitrate [i.e., in the nitrate – he was right!]; animals absorb oxygen into their blood when they breathe; air breathed out by animals has less oxygen in it than fresh air.

Watch steel melt when charcoal (carbon) burns in liquid oxygen. (Liquid oxygen is much more concentrated than the gas. Higher concentrations lead to faster reaction rates.)
Liquid oxygen is pale blue and paramagnetic. Watch it stick to a magnet. (3 min 15 secs and onwards.)
Laboratory electrolysis of water. Electrical energy is used to split water. Watch out for the different ways the two gases are collected.

O2 is non-toxic under normal conditions.

However, exposure to oxygen at higher than normal pressures, e.g. scuba divers, can lead to convulsions.

Ozone (O3) is toxic and if inhaled can damage the lungs.

Oxygen in its common form (O2) is a colorless, odorless and tasteless diatomic gas.

Oxygen is extremely reactive and forms oxides with nearly all other elements except noble gases.

Oxygen dissolves more readily in cold water than warm water. As a result of this, our planet’s cool, polar oceans are more dense with life than the warmer, tropical oceans.

Liquid and solid oxygen are pale blue and are strongly paramagnetic.

Ozone (O3), another form (allotrope) of oxygen, occurs naturally in the Earth’s upper atmosphere. It is made by the action of ultraviolet light on O2. Ozone shields us from much of the harmful ultraviolet radiation coming from the sun. In Earth’s early atmosphere, before oxygen and hence ozone levels were sufficiently high, the ultraviolet radiation reaching our planet’s surface would have been lethal to many organisms.(5)

The major commercial use of oxygen is in steel production. Carbon impurities are removed from steel by reaction with oxygen to form carbon dioxide gas.

Oxygen is also used in oxyacetylene welding, as an oxidant for rocket fuel, and in methanol and ethylene oxide production.

Plants and animals rely on oxygen for respiration.

Pure oxygen is frequently used to help breathing in patients with respiratory ailments.

Source: Oxygen is the most abundant element in the Earth’s crust, accounting for almost half of it by mass. More than half of the atoms in the Earth’s crust are oxygen atoms. About 86 percent of the mass of Earth’s oceans is oxygen – mainly in the form of water.

Oxygen is the third most common element in the Universe, behind hydrogen and helium. It is obtained commercially from liquefied air separation plants. It can be prepared in the laboratory by electrolysis of water.