The chemical element vanadium is classed as a transition metal. It was discovered in 1801 by Andres Manuel del Rio.

Vanadium was discovered in 1801 by the Spanish scientist Andres Manuel del Rio.

Del Rio had moved to Mexico as a professor of Chemistry and Mineralogy at the Royal School of Mines, Mexico City.

He named his new element panchromo or panchromium meaning ‘all of the colors’ because of the wide range of colors he had found when investigating the element’s salts.

He then renamed the element eritrono or erythronium, from the Greek word eruthros, meaning red. The new name was inspired by the red color which was seen when Group 1 or Group 2 oxide salts of the new element – for example sodium vanadium oxide – were heated or acidified. (1),(2),(3)

In 1805 the French chemist Hippolyte-Victor Collet-Descotils examined the lead ore and announced that erythronium was actually impure chromium – an analysis which, unfortunately, del Rio accepted.

Nothing more was heard of the element until 1830, when Nils Gabriel Sefström in Stockholm, Sweden, found a new metal in a Swedish iron ore.

He called this new element vanadium after ‘Vanadis’ the Scandinavian goddess of beauty because of the beautiful multicolored compounds formed by the metal. (4)

In the same year, German chemist Friedrich Wöhler reinvestigated the Mexican lead ore and found that vanadium was identical to del Rio’s erythronium. (5)

The metal was first isolated by Sir Henry E. Roscoe in 1867, in Manchester, England, by reducing vanadium chloride with hydrogen.

The vanadium mineral roscoelite was named in honor of Rocoe’s work. (4), (6)

Vanadium’s Periodic Table Neighborhood
Vanadium’s discovery in 1801 was initially disregarded because it was thought to be impure chromium, which sits on vanadium’s right in the periodic table. Of course, in 1801 the concept of the periodic table had not been born.

Vanadium’s colorful oxidation states: +2 is lavender; +3 is green; +4 is blue; +5 is yellow. When he saw these colors, Andres Manuel del Rio first decided to call the new element panchromium meaning ‘all of the colors.’ You can see these colors being generated by chemical reactions in the short video below. Photo by Steffen Kristensen.

Vanadium is named after the Scandinavian goddess of beauty because of its multiple colors. Watch it change colors as it changes oxidation state with shaking. 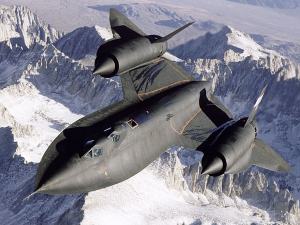 An SR-71B from NASA’s Dryden Flight Research Center, capable of flying at more than 2,200 mph and at altitudes of over 85,000 feet. A titanium-aluminum-vanadium alloy is used for jet engines and for high-speed aircraft. (Photo credit: NASA)

Although vanadium is an essential trace element for some creatures a number of its compounds are toxic.

Generally, the higher the oxidation state of vanadium, the more toxic the compound.

When present in compounds, vanadium exists mostly in the oxidation state V.

The metal oxidizes in air at around 660 oC to the pentoxide (V2O5).

The main use of vanadium is in alloys, especially with steel.

85% of all the vanadium produced goes into steel, 10% goes into alloys of titanium and 5% into all other uses. 7

It is usually added in the form of ferrovanadium, a vanadium-iron alloy.

Vanadium steel alloys are used in gears, axles and crankshafts.

Titanium-aluminum-vanadium alloy is used in jet engines and for high-speed aircraft.

Vanadium foil is used in cladding titanium to steel.

Vanadium pentoxide is used in ceramics and as a catalyst for the production of sulfuric acid.

The first extensive industrial use of vanadium metal was over a century ago in the vanadium-steel alloy chassis of the Ford Model T car.

A 1908 advertisement for the Model T read, “Vanadium steel, the strongest, toughest and most enduring steel ever manufactured, is used throughout the entire car.”

Source: Vanadium is not found free in nature but is found combined in about 65 different minerals. Vanadium is also found in bauxite and in fossil fuel deposits. Commercially, production of the metal is by calcium reduction of the pentoxide.

Isotopes: Vanadium has 18 isotopes whose half-lives are known, with mass numbers 43 to 60. Naturally occurring vanadium is a mixture of two isotopes, 50V and 51V with natural abundances of 0.2% and 99.7% respectively.