The chemical element zinc is classed as a transition metal. It has been known since ancient times. Its discoverer and discovery date are unknown. 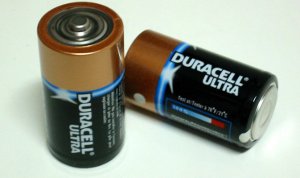 Batteries – the outside of these batteries is made of zinc – zinc acts as both battery electrode and container.

Zinc reacts very vigorously with sulfur. Here’s a test firing of a sulfur/zinc rocket.
Reaction of zinc with iodine.

Zinc ores have been used to make brass (a mixture of copper and zinc) and other alloys since ancient times.

A zinc alloy comprising 87.5% zinc was discovered in an ancient site in Transylvania.

Zinc smelting began in the 12th century in India by reducing calamine (zinc carbonate, ZnCO3) with wool and other organic materials.

The element name is reported to come from the old German word ‘zinke’ meaning pointed; a reference to the sharp pointed crystals formed after smelting.

Credit for isolating the metal is usually given to Andreas Marggraf in 1746, in Berlin. He heated a mixture of calamine ore and carbon in a closed vessel without copper to produce the metal.

Zinc is not considered to be particularly toxic.

Zinc is essential for good health, but excess zinc is toxic and can cause nausea.

Zinc is a bluish-silver, lustrous metal that tarnishes in moist air, producing a layer of carbonate. It is somewhat brittle at room temperature but malleable above 100 oC.

Zinc reacts with both acids and alkalis.

It is a fair conductor of electricity, and burns in air with a bright bluish-green flame producing white clouds of the oxide.

Zinc is used to galvanize iron to inhibit corrosion.

Zinc forms many alloys with other metals such as brass, German silver, nickel silver, typewriter metal and solders. Zinc alloys are used in die-castings for the car industry.

The metal acts as both the container and as an electrode in zinc-carbon batteries. The drawback of this dual use is that the electrode is consumed when the battery is in use, getting thinner until eventually the battery starts leaking.

Zinc is an essential trace element for animals and plants.

Zinc oxide, a white powder, is a versatile compound that has many uses.

It is used in sun block, make-up and in ointments such as calamine lotion.

It is also used in the rubber industry, concrete manufacturing and in paints.

Abundance solar system: 2 part per million by weight, 30 parts per billion by moles

Source: Zinc is found in nature combined with other elements as ores. The main ores of zinc are sphalerite (sulfide), smithsonite (carbonate), hemimorphite (silicate), and franklinite (zinc, manganese, iron oxide).

Commercially, zinc is obtained from zinc sulfide minerals. The minerals are concentrated and then usually roasted to oxidize the zinc sulfide to zinc oxide. Zinc is then extracted by either large-scale electroplating (electrowinning) or by pyrometallurgy, where processing reduces zinc oxide with carbon or carbon monoxide at 950 oC into the metal.