The chemical element mendelevium is classed as actinide metal. It was discovered in 1955 by Albert Ghiorso, Bernard Harvey, Gregory Choppin, Stanley Thompson, and Glenn Seaborg. 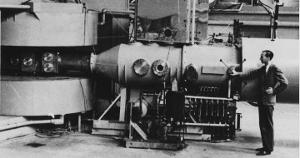 Many transuranium elements including mendelevium were discovered using the 60-inch cyclotron at the University of California Lawrence Radiation Laboratory, Berkeley.

Mendelevium was the ninth synthetic transuranium element of the actinide series to be discovered.

Mendelevium-256 (half-life 78.1 minutes) was produced by bombarding einsteinium-253 with alpha particles in the Berkeley 60-inch cyclotron.

Only 17 atoms of mendelevium-256 were initially produced in an all night experiment predicted to produce just one or two atoms of product every three hours. Each nuclear reaction created mendelevium-256 and a neutron. (1), (2), (3)

Mendelevium was identified by chemical analysis in an ion exchange experiment. (1)

The element is named after the Russian chemist Dmitri Mendeleev who devised the first periodic table in modern form.

Mendelevium is harmful due to its radioactivity.

Mendelevium is a synthetic, highly radioactive metal and has only been produced in miniscule amounts.

Mendelevium was the first element to be produced one atom at a time.

Mendelevium metal has not been prepared. (3)

Mendelevium is of scientific research interest only.

Source: Mendelevium is a synthetic element and is not found naturally. Mendelevium is produced through charged-particle of lighter elements in particle accelerators.