The chemical element bromine is classed as a halogen and a nonmetal. It was discovered in 1825 by Carl Lðwig (Loewig). 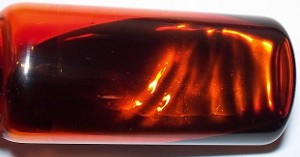 Bromine in sample-tube. (Photo by Greenhorn1) 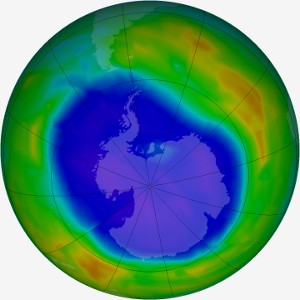 Ozone Depletion Above Antarctica: The intensity of blue shows the severity of ozone depletion above Antarctica in September 2011. Atom for atom, bromine atoms are 40-100 times more destructive in the ozone layer than chlorine atoms. Reactions involving bromine are responsible for up to half of the loss of ozone above Antarctica. The largest source of ozone-depleting bromine is methyl bromide. Methyl bromide’s main use is as a fumigant. About 30% of the bromine in the atmosphere comes from human activities, the rest is natural. (7) Photo: Nasa Ozone Hole Watch.

Vigorous reaction between bromine and aluminum.
How bromine is used to distinguish between saturated and unsaturated hydrocarbons.

Bromine compounds have been used since ancient times.

In the first century AD the Roman author Pliny described one of the world’s first chemical industries: dye factories making Tyrian purple. Tyrian purple (or royal purple) is an ancient purple dye obtained from a marine mollusk. A major component of the dye is the bromine compound 6,6′-dibromoindigo. (1)

Three people are significant in the discovery of the element bromine.

First there’s German chemist Justus von Liebig, one of most famous chemists of his time. Liebig could have been credited with the independent discovery of bromine, but he squandered the opportunity. In 1825 a salt maker sent Liebig a sample of salt spring waters from the German town of Bad Kreuznach, asking for an analysis.

The sample had a relatively high amount of bromine in it, which Liebig isolated. Without considering the substance too seriously, he concluded it was a compound of iodine and chlorine.

Only when bromine’s existence had been announced did an anguished Liebig return to the red-brown liquid to study it closely.

He then placed the bottle in his ‘mistakes cupboard’ to remind himself that preconceived ideas ruined his chance of discovering a new element and to try not to make the same mistake again. (2), (3), (4), (5)

The next name in the story of bromine is Carl Lðwig (Loewig), who discovered bromine in 1825, while still a chemistry student at Heidelberg University, Germany.

Lðwig’s home town was Bad Kreuznach, where Liebig’s sample had come from. Lðwig had taken water from a salt spring in Bad Kreuznach and added chlorine to the liquid. He shook the solution with ether and found a red-brown substance dissolved in the ether. Lðwig evaporated the ether to leave a red-brown liquid: bromine.

His professor at Heidelberg asked Lðwig to prepare more of this substance for testing. By the time Lðwig had done this it was 1826 and he had missed his chance, because a final name – Antoine Balard – had taken over the story of bromine’s discovery.

In 1824 Antoine Balard, aged 21, was studying the plant life in a salt marsh in Montpellier, France. He became interested in salt deposits he saw and began investigating them.

He took brine (sea water in which salts have been concentrated by evaporation of water) and crystallized salt from it. He took the remaining liquid and saturated it with chlorine.

Alert to the possibility that he had found something very interesting, Balard gave the French Academy of Science a sealed envelope containing his initial results in 1824.

He finally published his results in 1826, providing evidence that the substance he had discovered was a new ‘simple body’ – i.e. an element, not a compound. (3)

As first to publish, he became bromine’s discoverer. Ironically, like Liebig, his first idea was that the substance was a compound of chlorine and iodine. (3)

The French Academy named the new element after the Greek bromos for ‘stench’ (6) because bromine, quite simply, stinks.

Bromine is the only nonmetallic element that is liquid at ordinary temperatures.

It is a dense, reddish-brown liquid which evaporates easily at room temperature to a red vapor with a strong, chlorine-like odor.

Bromine is less reactive than chlorine or fluorine but more reactive than iodine. It forms compounds with many elements and, like chlorine, acts as a bleaching agent.

Uses of Uses of Bromine

Bromine compounds are used as pesticides, dyestuffs, water purification compounds, and as a flame-retardants in plastics.

1,2-dibromoethane is used as an anti-knock agent to raise the octane number of gasoline and allow engines to run more smoothly. This application has declined as a result of environmental legislation.

Potassium bromide is used as a source of bromide ions for the manufacture of silver bromide for photographic film.

Source: Bromine is obtained from natural brine deposits. Some bromine is still extracted today from seawater, which contains only about 70 ppm.

Isotopes: Bromine has 26 isotopes whose half-lives are known, with mass numbers 68 to 94. Naturally occurring bromine is a mixture of its two stable isotopes and they are found in the percentages shown: 79Br (50.7%) and 81Br (49.3%).