The chemical element krypton is classed as a noble gas and a nonmetal. It was discovered in 1898 by William Ramsay and his assistant Morris Travers. 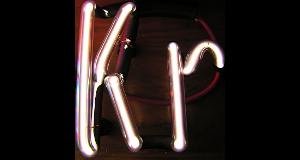 Krypton gas glows with the help of a few thousand volts. Image: Pslawinski.

William Ramsay pointing to the periodic table’s final column containing the noble (or inert) gases. Ramsay was awarded the Nobel Prize for Chemistry in 1904 for his work in the discovery of the inert gases. Image: Vanity Fair 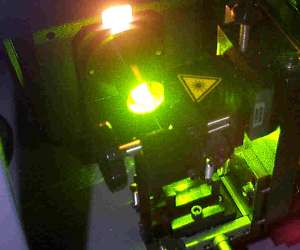 Ramsay had previously discovered helium and argon. He was aware that more new elements must lie in the same group of the periodic table.

Ramsay and Travers considered the gap in the periodic table between helium and argon. They reasoned that a new element (it’s now called neon) must exist to fill this gap; they were determined to find it. And find it they did, but only after their search had first revealed another new element: krypton. (1)

Aware of the history of chemistry, Ramsay knew that sometimes one new element can hide another. For example, Johan Gadolin had discovered yttrium in the mineral we now call gadolinite. Some years later Carl Gustaf Mosander discovered the new elements erbium and terbium in gadolinite; they had been there all along, but Gadolin had not found them. Ramsay wondered about the possibility of finding small amounts of the elusive new element hiding in one of his earlier discoveries, argon.

Ramsay and Travers decided they would extract a large volume of argon from air. They would liquefy the argon, and then distil it into separate fractions to see whether the lightest fractions contained the new gas. (2)

With little experience of handling liquid gases, they obtained a liter of liquid air in order to find out how to work with it. In their practice work, they evaporated most of it, leaving just 100 ml. Ramsay knew it was highly improbable the new gas, lighter than argon, could be present in this residual sample, but the exciting idea came to him that a new, heavier, gas might just be present.

With this in mind, Travers removed oxygen and nitrogen from the gas using red-hot copper and magnesium. He placed a sample of the remaining gas in a vacuum tube and applied a high voltage to measure the gas’s spectrum.

He found Argon was present, as expected, but also two new brilliant lines, one yellow and one green, which had never been seen before.

Krypton had been discovered. Ramsay chose the element’s name from the Greek word ‘kryptos’ meaning ‘hidden.’

For many years after the noble gases were discovered most scientists believed that they would not form compounds. This turned out to be incorrect.

William Ramsay actually did believe compounds would be possible, writing in 1902: “I have had for a long time the idea that krypton and xenon may enter into combinations much more easily than the other gases; but how to bring it about?” (3)

It took another 60 years before his question would be answered. (See Interesting Facts below.)

William Ramsay received the Nobel Prize for Chemistry in 1904, “in recognition of his services in the discovery of the inert gaseous elements in air, and his determination of their place in the periodic system.” He was responsible for adding an entire new group to the periodic table. Radon was the only noble gas he didn’t discover.

Krypton is considered to be non-toxic.

Although it is extremely unreactive krypton can react with the very reactive gas fluorine. A few compounds of krypton have been prepared, including krypton (II) fluoride and krypton clathrates.

Solid krypton is white and crystalline.

Krypton is used in lighting products:

An important use is in high-powered, flashing airport runway lights.

Krypton is employed alongside other gases to make luminous ‘neon light‘ style signs that glow with a greenish-yellow light.

Krypton is used as a filling gas for energy-saving fluorescent lights and as an inert filling gas in incandescent bulbs.

The relative abundance of krypton versus hydrogen can be used by astronomers to measure how much nucleosynthesis (element formation) has taken place in any region of interstellar space. (7)

Between 1960 and 1983, an international agreement defined the meter length in terms of the wavelength of light emitted from the krypton isotope, 86Kr. (The meter is now defined as the distance traveled by light in vacuum during a time of 1/299,792,458 of a second. The time is measured using a cesium atomic clock.)