The chemical element sodium is classed as an alkali metal. It was discovered in 1807 by Sir Humphry Davy.

A sodium salt held in a hot, blue flame burns with a characteristic yellow flame. Image by Herge.

In 1806 Sir Humphry Davy discovered that chemical bonding was electrical in nature and that he could use electricity to split substances into their basic building blocks – the chemical elements.

The electrolysis was powered by the combined output of three large batteries he had built.

Davy noted that the metal which formed at the wire electrode he placed in the sodium hydroxide was a liquid, but became solid on cooling and “appeared to have the lustre of silver.” (1)

“It is exceedingly malleable and is much softer than any of the common metallic substances… this property does not diminish when it is cooled to 32 oF (0 oC).”

He asked whether the new substance should be classed as a metal and noted that most other scientists thought it should, despite the fact that its density was much lower than the other metals then known:

“…for amongst the metals themselves there are remarkable differences in this respect, platina [we now call it platinum] being nearly four times as heavy as tellurium.”

He named the new metal sodium, because he had used caustic soda or, more simply, soda, as his source of the element. (2),(3)

In Germany caustic soda was known as natronlauge and L. W. Gilbert suggested the new element should be called natronium.

Jacob Berzelius preferred the shorter natrium, from which we get the chemical symbol for sodium, Na. (4) 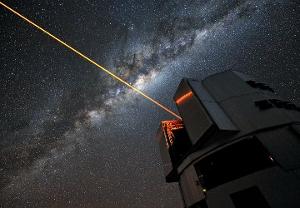 This laser beam is tuned to energize sodium atoms left behind by the passage of meteorites in Earth’s mesosphere. The energized sodium atoms glow, forming a small, bright spot. Anyone looking from ground level sees a new, artificial star. The twinkles of this ‘little star’ are fed into an adaptive optics system to restore the image of this ‘star’ to a sharp point. The atmosphere’s distortions are therefore removed, allowing very clear images to be taken of real stars. Image by ESO/G. Hüdepohl (www.atacamaphoto.com).

The importance of the sodium-potassium pump to our lives is shown by the fact that it uses one-third of our resting energy. The pump maintains our cells’ electrolyte balance, with excess potassium ions inside cells and excess sodium ions outside cells. This concentration gradient creates a voltage across the cell wall, which allows electrical signals to be transmitted in neurons and in muscles. It also provides the energy for processes in cell-membranes. Image by Phi-Gastrein.

A sphere containing 13 tons of rotating liquid sodium will be used in experiments to learn more about Earth’s magnetic field.
What happens when 20,000 lb of sodium meets a lake?

Sodium is considered to be non-toxic. Contact with the skin may, however, cause irritation and burns.

Sodium is a soft, silvery-white metal. It is soft enough to cut with the edge of a coin.

Sodium burns in air with a brilliant yellow flame.

Sodium floats on water, because its density is lower than water’s. It also reacts vigorously with water – violently if more than a small amount of sodium meets water (see video on left) – to produce sodium hydroxide and hydrogen gas. Sodium reacts with water more vigorously than lithium and less vigorously than potassium. Explosions occur when the heat generated by the sodium-water reaction ignites the resulting hydrogen gas.

Metallic sodium is used in the manufacture of sodamide and esters, and in the preparation of organic compounds. The metal also may be used to modify alloys such as aluminum–silicon by improving their mechanical properties and fluidity. Sodium is used to descale (smooth the surface of) metals and to purify molten metals.

Sodium vapor lamps are highly efficient in producing light from electricity and are often used for street lighting in cities.

Source: Due to its high reactivity, sodium is found in nature only as a compound and never as the free element. Sodium is our planet’s sixth most abundant element and it is the most abundant alkali metal. Sodium is obtained commercially by electrolysis of molten sodium chloride.

Isotopes: Sodium has 16 isotopes whose half-lives are known, with mass numbers 20 to 35. Naturally occurring sodium consists of its one stable isotope, 23Na.