The chemical element iodine is classed as a halogen and a nonmetal. It was discovered in 1811 by Bernard Courtois.

Iodine was discovered by Bernard Courtois in 1811 in France.

This, rather surprisingly, produced a purple vapor, which condensed into dark crystals. These were the first crystals of iodine ever made.

Courtois studied this new substance and found that it combined well with phosphorous and hydrogen, but it did not form compounds easily with carbon or oxygen.

He also discovered that when mixed with ammonia it formed a brown colored solid (nitrogen triiodide) that exploded at the slightest touch.

Iodine’s name comes from the Greek work ‘iodes’ meaning violet. Iodine’s purple vapor is shown below in a photo by Matias Molnar. 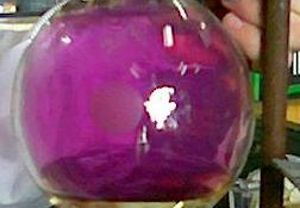 In small doses, iodine is slightly toxic and it is highly poisonous in large amounts. Elemental iodine is an irritant which can cause sores on the skin. Iodine vapor causes extreme eye irritation.

Iodine is a bluish-black, lustrous solid. Although it is less reactive than the elements above it in group 17 (fluorine, chlorine and bromine) it still forms compounds with many other elements.

Although iodine is a non-metal, it displays some metallic properties.

Iodine is important in medicine, in both radioactive and non-radioactive forms. Iodide and thyroxin, which contains iodine, are used inside the body.

A solution containing potassium iodide (KI) and iodine in alcohol is used to disinfect external wounds. Elemental iodine is also used as a disinfectant.

Silver iodide is used in photography.

Iodine’s other uses include catalysts, animal feeds and printing inks and dyes.

Source: In nature, iodine occurs in the form of iodide ions, mainly in seawater. It is introduced into the food chain via seaweed and other sea-plants. Iodine is found in some minerals and soils.

Commercially, iodine is obtained in several ways, such as taking iodine vapor from processed brine, by ion exchange of brine or by releasing iodine from iodate taken from nitrate ores.

Isotopes: 34 whose half-lives are known, with mass numbers 108 to 141. Naturally occurring iodine consists of the one stable isotope: 127I