The chemical element ruthenium is classed as a transition metal. It was discovered in 1844 by Karl K. Klaus.

Ruthenium was the last of the six platinum group metals (platinum, palladium, rhodium, osmium, iridium and ruthenium) to be discovered.

The initial discovery of ruthenium was thought to have occurred in 1828, when Swedish chemist Jons Jacob Berzelius and Russian chemist Gottfried W. Osann examined the residues left from crude platinum ores after dissolving them in aqua regia (a concentrated solution of hydrochloric and nitric acids).

Osann believed that there were three new metals in these residues, which he called pluranium, polinium and ruthenium. Berzelius was, however, skeptical.

Later, in 1844, in Kazan, Russia, Karl K. Klaus repeated Osann’s work to clarify the results. He proved that there was only one new metal present in the residues. He kept Osann’s name of ruthenium for this new metal.

Klaus used a lengthy process to obtain the salt, ammonium chlororuthenate, (NH4)2RuCl6, from which he could isolate the metal ruthenium and identify its properties. (1)

The element’s name comes from the Latin word ‘Ruthenia’ meaning Russia, as the platinum ores were originally from the Ural Mountains in Russia.

Below is a photo, by Tomihahndorf, of a 1 gram bead of high-purity ruthenium. 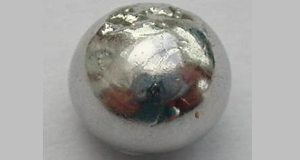 Ruthenium is immune to concentrated acids, but can be dissolved by household bleach. Do not try this at home!

Ruthenium is a suspected carcinogen and its compounds strongly stain the skin. Ruthenium tetroxide (RuO4) is highly toxic.

Ruthenium is a very rare, hard, lustrous, brittle, silvery-white metal that does not tarnish at room temperature.

The metal is unaffected by air, water and acids.

It reacts with molten alkali and halogens and can oxidize explosively.

Small amounts of ruthenium are used to harden platinum and palladium and it can also be alloyed with these metals to make electrical contacts for severe wear resistance.

The addition of 0.1% ruthenium improves the corrosion resistance of titanium a hundred times over.

Ruthenium has catalytic properties; for example, hydrogen sulfide can be split by light in the presence of an aqueous suspension of cadmium sulfide particles loaded with ruthenium dioxide.

Interestingly, ruthenium is used in some Parker pen nibs, such as the Parker 51 whose nib is marked ‘RU’, and consists of 96.2% ruthenium and 3.8% iridium(2).

Source: Ruthenium is found free in nature often with the other platinum group metals. Commercially, it is obtained from pentlandite (a sulfide of iron and nickel) which contains small quantities of ruthenium.