The chemical element phosphorus is classed as a nonmetal. It was discovered in 1669 by Hennig Brand. 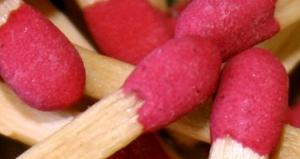 Hennig Brand discovers phosphorus. The white phosphorus is glowing with exaggerated intensity. White phosphorus’s natural chemiluminescence produces a rather dim green glow. “The Alchymist, In Search of the Philosopher’s Stone.” Painted by Joseph Wright in 1771.

Brand called the substance he had discovered ‘cold fire’ because it was luminous, glowing in the dark.

Brand was an alchemist and, like other alchemists, he was secretive about his methods.

He did not reveal his method publicly, choosing instead to sell it to Johann Daniel Kraft and Kunckel von Lowenstern.(1)

Leibniz, also thinking as an alchemist, mistakenly believed Brand might be able to discover the philosophers’ stone by producing a large quantity of phosphorus.(1)

Brand’s method is believed to have consisted of evaporating urine to leave a black residue that was then left for a few months. The residue was then heated with sand, driving off a variety of gases and oils which were condensed in water.

The final substance to be driven off, condensing as a white solid, was phosphorus.(2)

This was a typically alchemical method – alchemists examined the properties of body fluids, hoping to better understand living things in their search for the philosophers’ stone, which they believed offered the prospect of eternal life.

Brand’s method became more widely known in 1737 when an unknown person sold it to the Academy of Sciences in Paris.

Phosphorus was produced by this method until the 1770s when Swedish scientist Carl Wilhelm Scheele – the discoverer of chlorine and one of oxygen‘s independent discoverers – found that phosphorus could be prepared from bone.(3)

The name comes from the Greek word ‘phosphoros’ meaning bringer of light.

Demonstration of white phosphorus’s reactions and properties.
The phosphorus cycle.

White phosphorus is highly toxic. Skin contact can result in severe burns. Red phosphorus (provided it is not contaminated with white phosphorus) is considered non-toxic.

White phosphorus is a highly reactive, waxy, white-yellow, transparent solid with acrid fumes. It emits a weak green glow (luminescence) in the presence of oxygen. It is insoluble in water, but soluble in carbon disulfide. White phosphorus ignites spontaneously in air, burning to the pentoxide (P4O10).

Phosphorus exists in two other main allotropic forms: red, and black (or violet).

Red phosphorus results when white phosphorus is heated or exposed to sunlight.

Black phosphorus is the least reactive allotrope and has a graphite-like structure.

Phosphorus is a vital plant nutrient and its main use – via phosphate compounds – is in the production of fertilizers. Just as there are biological carbon and nitrogen cycles, there is also a phosphorus cycle.

Phosphorus is used in the manufacture of safety matches (red phosphorus), pyrotechnics and incendiary shells.

Phosphorus is also used in steel manufacture and in the production of phosphor bronze.

Phosphates are ingredients of some detergents.

Abundance solar system: 7 parts per million by weight, 300 parts per billion by moles

Source: Phosphorus does not occur as a free element in nature, but it is found in many different minerals. It is produced commercially from calcium phosphate (phosphate rock): calcium phosphate is heated in a furnace with silica and carbon to produce vaporized tetraphosphorus, which is then condensed into phosphorus as a white powder under water to prevent oxidation.

Isotopes: Phosphorus has 18 isotopes whose half-lives are known, with mass numbers 26 to 43. Naturally occurring phosphorus consists of its one stable isotope, 31P.