The chemical element rhenium is classed as a transition metal. It was discovered in 1925 by Walter Noddack, Ida Tacke, and Otto Berg. 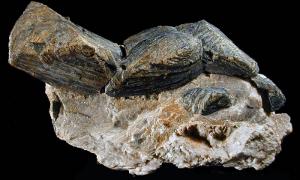 Russian chemist Dmitri Mendeleev created the periodic table in 1869. From gaps he saw in the table, Mendeleev predicted the existence of undiscovered elements.

He said two of the elements he had predicted would have similar properties to manganese. He called these eka-manganese, now technetium, and dvi-manganese, now rhenium. (1) (Sanskrit: ‘eka’ means first and ‘dvi’ means second.)

Moseley had found that it made more sense to arrange elements in the periodic table by atomic number, not atomic weight as they had been previously. This led to gaps where undiscovered elements belonged; one of these was element 75.

Scientists now knew an element with atomic number 75 was definitely available for discovery. Another 12 years passed before the discovery was finally made.

In 1925, in Berlin, Germany, Walter Noddack, Ida Tacke, and Otto Berg found the new element in platinum ores and columbite. The group also announced their discovery of element 43 – now known as technetium – at the same time. They claimed to have found both elements through X-ray analysis.

Their discoveries were disputed by many, but repeated experiments proved element 75 had indeed been discovered. (2) (3)

56 years had passed since Mendeleev had published his periodic table; the periodic table was now complete, at least for stable elements. Rhenium was the final element discovered which had at least one stable isotope.

All future discoveries would be of elements with no stable isotopes; elements that would undergo radioactive decay.

The Five Refractory Metals
Rhenium is one of the five refractory metals – note their close neighborhood relationship in the periodic table.

The toxicity of rhenium and its compounds is not well documented. Elemental rhenium has been described as ‘relatively inert’ in the body.

It resists corrosion and oxidation but slowly tarnishes in moist air.

Of the elements, only carbon and tungsten have higher melting points and only iridium, osmium, and platinum are more dense.

Rhenium is one of the five major refractory metals (metals with very high resistance to heat and wear).

The other refractory metals are tungsten, molybdenum, tantalum and niobium.

Rhenium is used with platinum as catalysts in the production of lead-free, high-octane gasoline.

The metal is used in alloys for jet engines and in tungsten and molybdenum based alloys.

It is widely used as filaments for mass spectrographs.

Rhenium is also used as an electrical contact material.

Rhenium catalysts are exceptionally resistant to poisoning from nitrogen, sulfur and phosphorous and are useful in the hydrogenation of fine chemicals.

Source: Rhenium is not found free in nature but is found in small quantities in platinum and molybdenum ores and many minerals. Commercially, rhenium is recovered as a by-product of copper refining.

Isotopes: Rhenium has 33 isotopes whose half-lives are known, with mass numbers from 160 to 192. Naturally occurring rhenium is a mixture of two isotopes, 185Re and 187Re, with natural abundances of 37.4% and 62.6% respectively.