The chemical element carbon is classed as a nonmetal. It has been known since ancient times. Its discoverer and discovery date are unknown.

Carbon has been known since ancient times in the form of soot, charcoal, graphite and diamonds. Ancient cultures did not realize, of course, that these substances were different forms of the same element

French scientist Antoine Lavoisier named carbon and he carried out a variety of experiments to reveal its nature.

In 1772 he pooled resources with other chemists to buy a diamond, which they placed in a closed glass jar. They focused the sun’s rays on the diamond with a remarkable giant magnifying glass and saw the diamond burn and disappear.

Lavoisier noted the overall weight of the jar was unchanged and that when it burned, the diamond had combined with oxygen to form carbon dioxide. (1), (2) He concluded that diamond and charcoal were made of the same element – carbon.

In 1779, Swedish scientist Carl Scheele showed that graphite burned to form carbon dioxide and so must be another form of carbon.(3)

In 1796, English chemist Smithson Tennant established that diamond was pure carbon and not a compound of carbon; it burned to form only carbon dioxide.

Tennant also proved that when equal weights of charcoal and diamonds were burned, they produced the same amount of carbon dioxide. (4)

Although it had been previously attempted without success, in 1955 American scientist Francis Bundy and coworkers at General Electric finally demonstrated that graphite could be transformed into diamond at high temperature and high pressure.(5)

In 1985, Robert Curl, Harry Kroto and Richard Smalley discovered fullerenes, a new form of carbon in which the atoms are arranged in soccer-ball shapes. The best known fullerene is buckminsterfullerene, also known as C60, consisting of 60 carbon atoms. A large family of fullerenes exists, starting at C20 and reaching up to C540. (6), (7)

The most recently discovered allotrope of carbon is graphene, which consists of a single layer of carbon atoms arranged in hexagons. If these layers were stacked upon one other, graphite would be the result. Graphene has a thickness of just one atom.

Graphene’s discovery was announced in 2004 by Kostya Novoselov and Andre Geim, who used adhesive tape to detach a single layer of atoms from graphite to produce the new allotrope.

NASA’s Infrared Space Telescope Spitzer has identified buckminsterfullerene (buckyballs) equal in mass to 15 of our moons in the Small Magellanic Cloud dwarf galaxy. Image by NASA/JPL-Caltech. 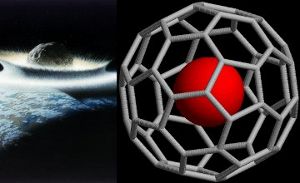 Atoms of extraterrestrial noble gases helium-3 and argon-36 have been found trapped within buckyballs on Earth. The buckyballs arrived in comets or asteroids and have been discovered in rocks associated with the Permian-Triassic mass extinction 250 million years ago. Image Don Davis and Hajv01.

Left: Combustion of coal (mainly amorphous carbon) in air. Right: Diamonds (crystalline carbon). We thought about taking a picture of combusting diamonds – they combust at about 800oC – but we couldn’t afford it!

Carbon based lifeforms, such as these, dominate our planet.

DNA. The famous double-helix molecule is made possible by carbon’s ability to form long molecular chains.

Pure carbon has very low toxicity. Inhalation of large quantities of carbon black dust (soot/coal dust) can cause irritation and damage to the lungs.

Carbon can exist with several different 3 dimensional structures in which its atoms are arranged differently (allotropes).

Carbon can also exist in an amorphous state. Many allotropes commonly described as amorphous, however, such as glassy carbon, soot, or carbon black usually have enough structure to not be truly amorphous. Although crystalline nanotubes have been observed, they are generally amorphous.(10)

The structures of eight allotropes are shown at the bottom of this page.

Interestingly, graphite is one of the softest substances and diamond was thought, until recently, to be the hardest naturally occurring substance.

An extremely rare allotrope of carbon, lonsdaleite, has been calculated, in pure form, to be 58% stronger than diamond. Lonsdaleite is a diamond-like carbon network which has graphite’s hexagonal structure. It is made when meteorites containing graphite hit another body, such as Earth. The high temperatures and pressures of the impact transform the graphite into lonsdaleite.

Diamond’s high thermal conductivity is the origin of the slang term ‘ice.’ At typical room temperatures your body temperature is higher than the room’s – including any large diamonds you may just happen to have lying around. If you touch any of these diamonds, their high thermal conductivity carries heat away from your skin faster than any other material. Your brain interprets this rapid transfer of heat energy away from your skin as meaning you are touching something very cold – so diamonds at room temperature can feel like ice.

Carbon (in the form of coal, which is mainly carbon) is used as a fuel.

Graphite is used for pencil tips, high temperature crucibles, dry cells, electrodes and as a lubricant.

Diamonds are used in jewelry and – because they are so hard – in industry for cutting, drilling, grinding, and polishing.

Carbon black is used as the black pigment in printing ink.

Carbon can form alloys with iron, of which the most common is carbon steel.

The 14C radioactive isotope is used in archaeological dating.

Carbon compounds are important in many areas of the chemical industry – carbon forms a vast number of compounds with hydrogen, oxygen, nitrogen and other elements.

Source: Carbon can be obtained by burning organic compounds with insufficient oxygen. The four main allotropes of carbon are graphite, diamond, amorphous carbon and fullerenes.

Natural diamonds are found in kimberlite from ancient volcanoes.

Graphite can also be found in natural deposits.

Fullerenes were discovered as byproducts of molecular beam experiments in the 1980s.

Isotopes: 13 whose half-lives are known, with mass numbers 8 to 20. Naturally occurring carbon is a mixture of two isotopes and they are found in the percentages shown: 12C (99%) and 13C (1%).

Isotope 14C, with a half-life of 5730 years, is widely used to date carbonaceous materials such as wood, archeological specimens, etc. for ages up to about 40 000 years.