The chemical element francium is classed as an alkali metal. It was discovered in 1939 by Marguerite Perey. 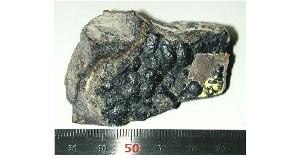 Francium was discovered by Marguerite Perey in 1939 when she was researching the radioactive decay of actinium-227.

The discovery took place at the Curie Institute in Paris. The element takes its name from the country of its discovery – France.

The discovery began, in 1935, when Perey aged 26, read a research paper claiming that American scientists had discovered beta particles being emitted by actinium which had a higher amount of energy than normal.

Perey was curious about this finding, and already being an expert on actinium related work, she decided to carry out her own experiments on actinium. She produced an ultra-pure actinium sample and studied its radiation. Perey discovered that about 1% of actiniums radioactivity was caused by it emitting alpha particles, not beta particles.

Perey had discovered that actinium-227 could decay by emitting a helium nucleus (also called an alpha particle) from its own nucleus. The daughter nucleus formed was a previously undiscovered element which she chose to call francium to honor her home country, France.

With 87 protons the new element belonged in Group 1 of the periodic table, joining the other five alkali metals: lithium, sodium, potassium, rubidium and cesium.

All elements discovered since then have been discovered when the element has been produced in the laboratory.

A nucleus emits a beta-particle (an electron) and an antineutrino. The result of this is that a neutron in the nucleus turns into a proton. When element 87 in the periodic table (francium) does this, the extra proton means that it becomes element 88 (radium).

Francium is a heavy, unstable, radioactive metal with a maximum half-life of only 22 minutes. It has a low melting point (27 oC, 81 oF) and, if enough of it could be accumulated, it would be liquid in a warm room.

Francium is the second rarest element in the Earth’s crust, next to astatine. Less than thirty grams of francium exists on Earth at any given time.

Francium is the least electronegative of all the elements, therefore it should be the most chemically reactive alkali metal. Unfortunately, it is not available in sufficient quantities to show it reacting with water – it is made in tiny quantities in particle accelerators. In theory, its reaction with water would be more violent than cesium’s and very much more violent than sodium’s.

Francium has been studied most recently at Stony Brook University, New York. Scientists there trapped up to ten thousand francium atoms at a time using laser beams in a magnetic field in order to measure their properties.

Commercially, there are no uses for francium, due to its rarity and instability. It is used for research purposes only.

Francium’s isotopes, with mass numbers ranging from 200 to 232, most commonly undergo alpha- or beta-decay.

Here are just a few examples of francium’s decay paths:

Francium-223 is the element’s longest lived isotope. It has a half-life of 22 minutes. It can emit an alpha-particle (a helium nucleus) to form astatine-219 or a beta-particle to form radium-223. (A beta-particle is an electron which is emitted from a nucleus when a neutron converts to a proton.)

Francium-221 has a half-life of 5 minutes. It can emit an alpha-particle to form astatine-217 or a beta-particle to become radium-221.

Francium-216 has a half-life of 0.7 microseconds. It can emit an alpha-particle to form astatine-212 or a positron to form radon-216.

Francium-212 has a half-life of 19 minutes. It can emit an alpha-particle to form astatine-208 or capture an orbital electron to form radon-212. (2) (During orbital electron capture, the nucleus captures one of the atom’s own electrons and emits a neutrino.)

Source: Francium occurs naturally as a result of the alpha radioactive decay of actinium.

Isotopes: Francium has 33 isotopes whose half-lives are known, with mass numbers 200 to 232. None are stable. 223Fr has the longest half-life at 21.8 minutes.