The chemical element nickel is classed as a transition metal. In the 1750s nickel was discovered to be an element by Axel Cronstedt.

Miners in Germany believed little fellows like this one had stopped them extracting copper and silver from nickel and cobalt arsenides. Fortunately George Brandt and Axel Cronstedt took a more scientific approach to the problem and discovered two new elements. Image by JNL.

Nickel is present in metallic meteorites and so has been in use since ancient times.

Artifacts made from metallic meteorites have been found dating from as early as 5000 BC – for example beads in graves in Egypt.(1)

Iron is the most abundant element in metallic meteorites, followed by nickel.

It was not until the 1750s that nickel was discovered to be an element.

In the 1600s, a dark red ore, often with a green coating, had been a source of irritation for copper miners in Saxony, Germany. They believed the dark red substance was an ore of copper, but they had been unable to extract any copper from it.

In frustration, they had named it ‘kupfernickel’ which could be translated as ‘goblin’s copper’ because clearly, from the miners’ point of view at any rate, there were goblins or little imps at work, preventing them extracting the copper.

Between 1751 and 1754, the Swedish chemist Axel Cronstedt carried out a number of experiments to determine the true nature of kupfernickel. (We now know that kupfernickel is nickel arsenide, NiAs.)

After finding that its chemical reactions were not what he would have expected from a copper compound, he heated kupfernickel with charcoal to yield a hard, white metal, whose color alone showed it could not be copper. Its properties, including its magnetism, led him to conclude that he had isolated a new metallic element.

Cronstedt named the new element nickel, after the kupfernickel from which he had isolated it. (2), (3), (4)

There is a satisfying symmetry in this discovery. Cronstedt was a pupil of George Brandt, who had discovered cobalt, which sits immediately to the left of nickel in the periodic table.

The names of both elements have their origins in the frustrations of miners caused by metal-arsenic ores: nickel arsenide and cobalt arsenide. Cobalt’s name is derived from the German ‘kobold’ meaning ‘goblin’ – a close relative of the creature from which nickel’s name was derived.

In cobalt’s case, miners mistakenly thought the ore contained silver, and called the ore kobold in frustration at the wicked goblins who they believed were preventing them getting silver from the ore. 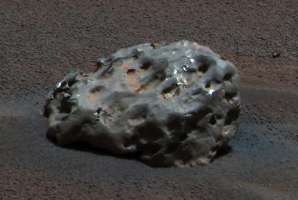 The first meteorite ever photographed on another planet. In 2005 NASA’s Mars rover Opportunity used spectrometers to discover that this basketball-size meteorite was mainly iron and nickel. Image by NASA/JPL/Cornell.

How to make your own nickel-iron battery. These batteries last for decades!
Reaction of nickel metal with nitric acid producing nickel nitrate and brown nitrogen dioxide gas. For some reason the video says nickel nitrate is blue. It is in fact green, as you can see.

Nickel and its compounds are considered to be carcinogenic. Approximately 10 to 20 percent of people are sensitive to nickel. Repeated contact with it leads to skin complaints (dermatitis). Such people should avoid contact with nickel, which can be found in jewelry.

Workers who have breathed very large amounts of nickel compounds have developed chronic bronchitis and lung and nasal cancers.

Nickel is a hard, silvery-white metal, which is malleable and ductile.

The metal can take on a high polish and it resists tarnishing in air.

Nickel is ferromagnetic and is a fair conductor of heat and electricity.

Most nickel compounds are blue or green.

The majority of nickel is used in corrosion-resistant alloys, such as stainless steel.

Tubing made from a copper-nickel alloy is used in desalination plants. This alloy is naturally resistant to corrosion by seawater and to biofouling.

Nickel steel is used for burglar-proof vaults and armor plate.

Nickel is also used in batteries – for example NiCd (nickel-cadmium) and Ni-MH (nickel-metal hydride) rechargeable batteries – and in magnets.

Nickel is taken from its ores by roasting and reduction processes which produce a metal of over 75% purity. The Mond process is then used to purify the nickel further.