The chemical element sulfur is classed as a chalcogen and a nonmetal. It has been known since ancient times. Its discoverer and discovery date are unknown. 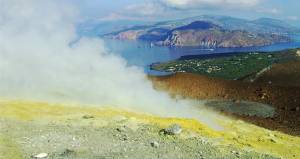 Deposits of sulfur around a volcanic vent

Most health benefits from onions and garlic come from sulfur compounds. 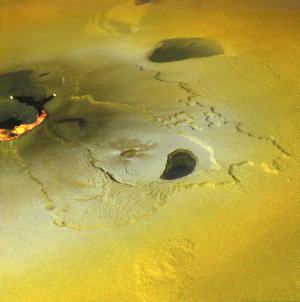 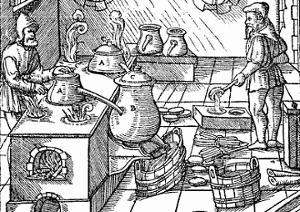 Ancient sulfur refining: Sulfur ore is heated in pots whose lids fit tightly to limit the release of SO2. (The modern short-term exposure limit for SO2 is 5 ppm. (12) ) Liquid sulfur is collected below the pots. Georgius Agricola, 1556.

Sulfur has been known since ancient times. In the Bible it is called brimstone. It can be found in its elemental state around volcano vents.

The name may have been derived from the Arabic ‘sufra’ meaning yellow, or the Sanskrit ‘shulbari’ meaning enemy (ari) of copper (shulba). (1)

The Sanskrit possibility is appealing, because it carries a message about people’s knowledge of chemistry from long ago: sulfur actually does react easily with many metals, including copper. (Sanskrit is one of the oldest Indo-European languages – over 3000 years old. Despite this, it is the human language most compatible with artificial intelligence. (2))

When sulfur burns it produces sulfur dioxide, a poisonous gas. At one time this gas was used in New York to fumigate buildings harboring infectious diseases. (3)

The use of burning sulfur for fumigation began several thousand years ago. In Homer’s ‘The Odyssey’ which is about 2800 years old, Odysseus says, “Bring sulfur, old nurse, that cleanses all pollution, and bring me fire, that I may purify the house with sulfur…” (4)

In the year 808 a Chinese text provides us with possibly the first recipe for gunpowder, containing saltpeter, sulfur and carbon. (5)

Sulfur is also believed to have been a component of ‘Greek Fire,’ a weapon similar to a flamethrower used by the Byzantine Empire. (6), (7)

Sulfur became a recognized chemical element in 1789, when Antoine Lavoisier included it in his famous list of the elements. (8)

In 1823, German chemist Eilhard Mitscherlich discovered sulfur’s allotropy: he showed that the crystal shapes of sulfur obtained from cooling molten sulfur were different from those obtained when the element crystallized from a solution. (9)

At this time the concept of allotropy – different structural forms of the same element – had not become a formal part of chemistry. It was not until 1841 that Berzelius introduced the term to explain sulfur’s monoclinic and rhombic forms. (10)

By the 1800s sulfur, in the form of sulfuric acid, had become the best way to judge a country’s wealth. Countries had even gone to war over sulfur.

Here’s what the great German chemist Justus Liebig had to say about it in about 1843:

“It is no exaggeration to say, we may fairly judge the commercial prosperity of a country from the amount of sulfuric acid it consumes.

(Sulfur’s price affects the price of…) bleached and printed cotton stuffs, soap, glass, etc, and remembering that Great Britain supplies America, Spain, Portugal, and the East, with these, exchanging them for raw cotton, silk, wine, raisins, indigo, etc, we can understand why the English Government should have resolved to resort to war with Naples (in 1839) in order to abolish the sulfur monopoly, which the latter power attempted recently to establish.” (11) 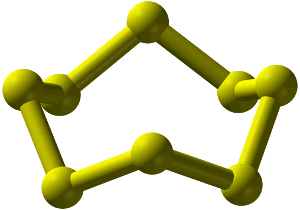 Elemental sulfur is considered to be of low toxicity.

Compounds such as carbon disulfide, hydrogen sulfide, and sulfur dioxide are toxic. For example, at 0.03 parts per million, we can smell hydrogen sulfide but it is regarded as safe for eight hours of exposure. At 4 ppm it may cause eye irritation. At 20 ppm exposure for more than a minute causes severe injury to eye nerves. At 700 ppm breathing stops. Death will result if there is not a quick rescue. Permanent brain damage may result. (14)

Sulfur is a soft, pale yellow, odorless, brittle solid. It is insoluble in water, but soluble in carbon disulfide. It burns with a blue flame, oxidizing to sulfur dioxide.

Sulfur exists in several crystalline and amorphous allotropes. The most common form is yellow, orthorhombic alpha-sulfur, which contains puckered rings of S8.

Sulfur is multivalent and combines, with valence 2, 4, or 6, with almost all other elements. The best known sulfur compound is hydrogen sulfide (H2S). This is a toxic gas that smells like rotten eggs; the smell is used in stink bombs, many of which release a small amount of hydrogen sulfide.

Sulfur’s main commercial use is as a reactant in the production of sulfuric acid (H2SO4). Sulfuric acid is the industrialized world’s number one bulk chemical, required in large quantities in lead-acid batteries for automotive use.

Sulfur is also used in the vulcanization of natural rubber, as a fungicide, in black gunpowder, in detergents and in the manufacture of phosphate fertilizers.

Sulfur is a vital element for all forms of life. It is a component of two amino acids, cysteine and methionine.

Sulfur is recovered commercially from underground deposits using the Frasch Process – superheated water and steam are pumped underground, where they melt the sulfur, allowing it to be pumped to the surface. Sulfur is also obtained commercially as a by-product of refining crude oil.