The chemical element lead is classed as an other metal. It has been known since ancient times. Its discoverer and discovery date are unknown.

Lead has been known since ancient times. We do not know who discovered it.

Its ores are widely distributed and it has a low melting point so it is easily smelted.

It was used in antiquity to make statues, coins, utensils and writing tablets. The Romans also used lead for plumbing.

Lead’s chemical symbol is Pb, which comes from its Latin name. Our name for the element comes from the Anglo-Saxon word for the metal, ‘lead’. 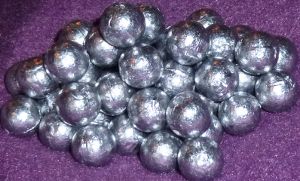 Uses of lead in the modern world.

Nasa: A cargo tag made of lead was unearthed during excavation of the original colony at Jamestown, Virginia. It is believed to have made the trip from England in 1611.

Lead and its compounds are poisonous.

Lead is a bluish-gray, soft, dense metal that has a bright luster when freshly cut.

It tarnishes slowly in moist air to form a dull gray coating.

The metal is highly ductile and malleable.

Lead is extremely resistant to corrosion and is a poor conductor of electricity.

Large quantities of lead, both as the metal and as the dioxide, are used in storage batteries.

Lead is also used in cable covering, as ammunition, as electrodes, in solder and as roofing material.

The metal is used as shielding from radiation, e.g. in x-ray rooms and nuclear reactors.

Lead oxide is also used in the manufacture of fine crystal glass.

Historically, lead was used in plumbing.

Tetraethyl lead was used as an anti-knock agent in petrol, and as an additive in paints. These uses have been reduced recently because of environmental concerns about cumulative lead poisoning.

Source: Lead rarely occurs naturally in nature and is can be found in ores, mainly with copper, zinc and silver. The principal lead mineral is lead sulfide (galena, PbS). Other common minerals are cerussite (lead carbonate, PbCO3) and anglesite (lead sulfate, PbSO4). Lead is refined from galena (PbS) by heating. A large amount of lead is also recovered from recycling.