The chemical element scandium is classed as a transition metal and rare earth. It was discovered in 1879 by Lars F. Nilson.

Scandium was discovered by Lars F. Nilson in 1879, in Uppsala, Sweden.

Nilson was studying the rare earth elements, attempting to isolate ytterbium from the minerals euxenite and gadolinite.

Part of Nilson’s method required the preparation of erbia (erbium oxide) from the minerals, which was then reacted to form erbium nitrate.

He applied heat to the nitrate and found that his sample contained small quantities of an unknown element with a low atomic weight. (1),(2)

Nilson named the element scandium after the Latin word ‘Scanda’ meaning Scandinavia, because the element occurs in rare minerals found there.

He studied scandium and determined its atomic weight was 44 (compared to 173 for ytterbium). (1)

Per Thedore Cleve showed that scandium had properties similar to those predicted by Mendeleev for eka-boron.

Metallic scandium was first prepared in 1937 by Fischer and his colleagues. They performed electrolysis of molten scandium, lithium and potassium chlorides in a graphite crucible with a tungsten wire with molten zinc as an electrode. (3)

Scandium is a transition metal. It is also regarded as a rare earth element because its chemical properties are similar to the rare earths, and it is found in the same ores.

Scandium is an element which chemists usually ignore! 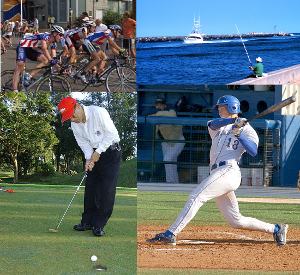 Very dilute scandium sulfate is used to improve the germination of seeds such as corn, peas and wheat.

Scandium is considered to be of low toxicity.

Scandium is a soft, light, silvery-white metal, which becomes slightly tinged with yellow or pink when exposed to air.

Scandium is almost as light (low density) as aluminum but it has a much higher melting point.

It is therefore of potential specialty use in aircraft – scandium will not be used generally because it is much more expensive than aluminum.

Scandium reacts with many acids.

When present in compounds, scandium exists usually in the trivalent state, Sc3+.

Its oxide is white and most of its salts are colorless. (1).

Scandium is used in aluminum-scandium alloys for aerospace industry components and for sports equipment such as bicycle frames, fishing rods, golf iron shafts and baseball bats.

Scandium iodide is used in mercury vapor lamps, which are used to replicate sunlight in studios for the film and television industry. Scandium oxide (scandia), is used to make high intensity “stadium” lights.

The radioactive isotope 45Sc is used in oil refineries as a tracing agent.

Very dilute scandium sulfate is used to improve the germination of seeds such as corn, peas and wheat.

Source: Scandium is not found free in nature but is found combined in minute amounts in over 800 minerals. Rare minerals from Scandinavia and Madagascar (thortveitite, euxenite, and gadolinite) are the only known concentrated sources of the element. Commercially, scandium is obtained as a by-product of uranium refining.

Isotopes: Scandium has 13 isotopes whose half-lives are known, with mass numbers 40 to 52. Naturally occurring scandium consists of its one stable isotope, 45Sc.