The chemical element lithium is classed as an alkali metal. It was discovered in 1817 by Johan Arfvedson. 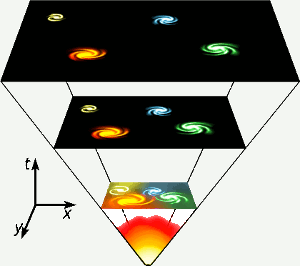 Lithium was made in the first three minutes of the universe’s existence, when temperatures everywhere were high enough for nuclear fusion to occur. This short, high energy phase is represented at the very bottom of the diagram. Image: Gnixon

Lithium was discovered by Johan Arfvedson in 1817 in Stockholm, Sweden, during an analysis of petalite (LiAlSi4O10).

He found the petalite contained “silica, alumina and an alkali.” (1)

The new alkali metal in the petalite had unique properties.

It required more acid to neutralize it than sodium and its carbonate was only sparingly soluble in water – unlike sodium carbonate.

The new alkali differed from potassium because it did not give a precipitate with tartaric acid.

Arfvedson tried to produce a pure sample of the new metal by electrolysis, but he was unsuccessful; the battery he used was not powerful enough. (2)

Davy obtained a small quantity of lithium metal by electrolysis of lithium carbonate. (3)

He noted the new element had a red flame color somewhat like strontium and produced an alkali solution when dissolved in water.

In days less safety-conscious than the present, Brande said of lithium, “its solution tastes acrid like the other fixed alkalies.” (4)

By 1855 Robert Bunsen and Augustus Matthiessen were independently producing the metal in large quantities by electrolysis of molten lithium chloride.

How do you extract a strip of lithium from an energizer battery?
Powdered lithium reacts with water.

Lithium is corrosive, causing skin burns as a result of the caustic hydroxide produced in contact with moisture. Women taking lithium carbonate for bi-polar disorder may be advised to vary their treatment during pregnancy as lithium may cause birth defects.

Lithium is soft and silvery white and it is the least dense of the metals. It is highly reactive and does not occur freely in nature.

Freshly cut surfaces oxidize rapidly in air to form a black oxide coating. It is the only common metal (but see radium) that reacts with nitrogen at room temperature, forming lithium nitride.

Lithium burns with a crimson flame, but when the metal burns sufficiently well, the flame becomes a brilliant white.

Lithium has a high specific heat capacity and it exists as a liquid over a wide temperature range.

Pure lithium metal is used in rechargeable lithium ion batteries and the metal is used as an alloy with aluminum, copper, manganese, and cadmium to make high performance aircraft parts.

Lithium also has various nuclear applications, for example as a coolant in nuclear breeder reactors and a source of tritium, which is formed by bombarding lithium with neutrons.

Lithium carbonate is used as a mood-stabilizing drug.

Lithium chloride and bromide are used as desiccants.

Lithium stearate is used as an all-purpose and high-temperature lubricant.

Source: Lithium does not occur as a free element in nature. It is found in small amounts in ores from igneous rocks and in salts from mineral springs. Pure lithium metal is produced by electrolysis from a mixture of fused (molten) lithium chloride and potassium chloride.

Isotopes: Lithium has 7 isotopes whose half-lives are known, with mass numbers 5 to 11. Naturally occurring lithium is a mixture of its two stable isotopes 6Li and 7Li with natural abundances of 7.6% and 92.4% respectively.