The chemical element americium is classed as an an actinide metal. It was discovered in 1944 by Seaborg, James and Morgan. 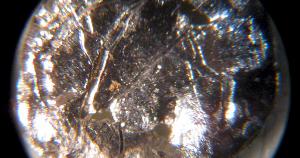 A small disc of americium-241 under the microscope. Image Ref.(3)

Americium was the fourth synthetic transuranium element of the actinide series to be discovered.

Americium-241 was first identified in 1944 by Seaborg, James and Morgan at the metallurgical laboratory at the University of Chicago. It was produced by the beta-particle decay of plutonium-241, which had been produced in a nuclear reactor by neutron bombardment of plutonium-239.

The researchers at first referred to americium as “pandemonium” owing to the difficulties they encountered trying to isolate it from another new element with which it was very closely associated,
curium – or “delirium” as it was first called.

Americium was first isolated as a pure compound by Burris Cunningham in 1945, at the University of Chicago.

Americium is harmful due to its radioactivity.

Americium is a silvery-white highly radioactive metal that has a density similar to lead.

Isotope 241Am, the most common isotope, decays to 237Np, emitting alpha and gamma radiation(1).

Americium is used as a portable source of gamma rays and alpha particles for use in medicine, science and industry.

It is also used as a target material in nuclear research to make even heavier elements.

Source: Americium is obtained as a by-product of plutonium processing.