The chemical element meitnerium is classed as a transition metal. It was discovered in 1982 by by research scientists led by Peter Armbruster and Gottfried Münzenber. 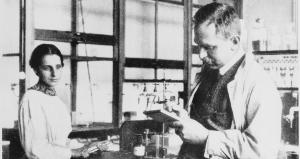 Meitnerium is named after Lise Meitner, who discovered nuclear fission. She is shown here in the laboratory with her colleague Otto Hahn.

Meitnerium was first synthesized by research scientists led by Peter Armbruster and Gottfried Münzenber at the Heavy Ion Research Laboratory in Darmstadt, Germany in 1982.

Meitnerium was produced when bismuth-209 was bombarded with accelerated iron-58 nuclei.

The element was named after physicist Lise Meitner.

Meitnerium is harmful due to its radioactivity.

Meitnerium is a synthetic, radioactive metal and has only been produced in tiny amounts.

Meitnerium is of scientific research interest only.

Source: Meitnerium is a synthetic radioactive metal, created via nuclear bombardment, and has only been produced in minute amounts. Meitnerium was produced by bombarding 209Bi with 58Fe which produced a single atom of the isotope 266Mt.

Isotopes: Meitnerium has 7 isotopes whose half-lives are known, with mass numbers from 266 to 278. None are stable. The most stable isotope is 278Mt, with a half-life of 8 seconds.