The chemical element hafnium is classed as a transition metal . It was discovered in 1923 by Georg von Hevesy and Dirk Coster. 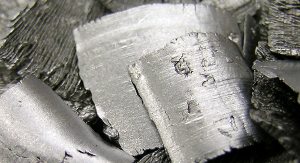 Hafnium metal is a silver color. It normally appears rather gray because of the oxide layer it forms in air. Hafnium powder, without the oxide layer, can ignite spontaneously in air. Image Ref. (1)

Hafnium’s existence was originally predicted by Russian chemist Dmitri Mendeleev. In his 1869 book “The Periodic Law of the Chemical Elements” he predicted the existence of an element with similar properties to, but heavier than titanium and zirconium.

In 1911, Georges Urbain, the discoverer of the rare earth lutetium, thought he had discovered element 72 during his spectral analysis of rare earths. He called this new element celtium, but three years later it was shown to be a mixture of already discovered lanthanides. (2)

In 1921, Neils Bohr suggested to Hungarian chemist Georg von Hevesy to look for the missing element in zirconium ores. (3) According to Bohr’s quantum theory of atomic structure, these metals would have similar chemical properties, so there was a good chance they would be found in the same ores. 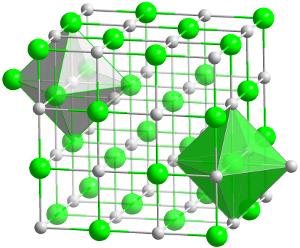 Crystal structure of hafnium carbide (HfC). This is the most refractory (heat resistant) compound known of any two elements in 1:1 ratio. 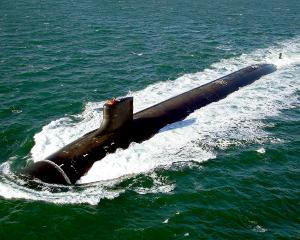 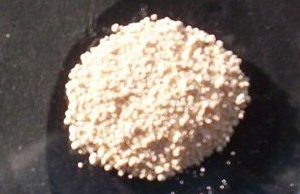 Hafnium is considered to be non-toxic. In powdered form it is pyrophoric (can ignite spontaneously).

Chemically it is similar to zirconium.

When present in compounds, hafnium exists mostly in the oxidation state IV.

Hafnium resists corrosion due to the formation of an oxide film on exposed surfaces.

It is unaffected by all acids (apart from hydrogen fluoride) and all alkalis.

Hafnium reacts with the halogens to form tetrahalides, and at high temperatures it reacts with carbon, boron, nitrogen, oxygen, silicon and sulfur.

Hafnium is used for nuclear reactor control rods because of its ability to absorb neutrons and its good mechanical and corrosion resistance qualities. This is in complete contrast to zirconium, which although is chemically is very similar to hafnium, is very poor at absorbing neutrons. Zirconium is therefore used in the cladding (outer layer) of fuel rods through which it is important that neutrons can travel easily.

Hafnium is also used in photographic flash bulbs, light bulb filaments, and in electronic equipment as cathodes and capacitors.

Hafnium alloys with several other metals, such as iron, niobium, tantalum and titanium.

Hafnium-niobium alloys, for example, are heat resistant and are used in aerospace applications, such as space rocket engines.

Hafnium-based compounds are used in gate insulators in the 45 nm generation of integrated circuits for computers.

Source: Hafnium is not found free in nature but is found in most zirconium minerals at a concentration of between one and five percent. Commercially, hafnium is produced as a by-product of zirconium refining. This is done using the Kroll Process, reducing the tetrachloride with magnesium or with sodium.