The chemical element mercury is classed as a transition metal. It has been known since ancient times. Its discoverer and discovery date are unknown. 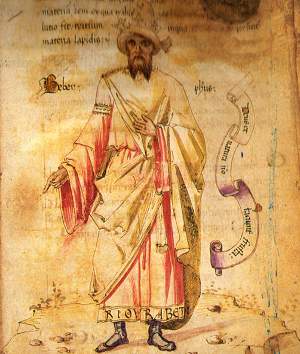 Geber, Jabir ibn Hayyan, born in Persia (Iran) in the 6th Century AD. Geber systemized and brought experimental methods to alchemy. He believed all metals were based on mercury mixed in different proportions and different purities with sulfur. If the mercury and sulfur were perfectly pure and mixed in perfect proportions, they would form gold. (10a)

Mercury or quicksilver has been known since ancient times. We do not know who discovered it.

Mercury was known to the ancient Chinese, Egyptians and Hindus and has been found in Egyptian tombs dating back to about 1500 B.C. (1), (2), (3)

In the fourth century B.C. we find Aristotle refers to mercury in writing as ‘hydro-argyros’ – which translates as liquid-silver or water-silver. (4)

The Romans modified the Greek name slightly, referring to mercury as Hydragyrum, from which we get mercury’s modern chemical symbol Hg.

Our modern name for the element was provided by alchemists. Alchemists observed the element’s rapid, liquid flow, and likened it to the fastest moving planet, Mercury. (The planet had been named after the fast moving Roman messenger of the gods, Mercury. (3))

Alchemists believed mercury was the most important of all substances because it encompassed solid and liquid, earth and heaven, and life and death. They also believed it offered the path by which base metals could become gold and represented the quintessential property of fluidity. (5),(6) They were wrong, of course!

Chinese emperors used mercury to prolong their lives (3) – although in all probability it had the opposite effect. (Despite the fact that mercury is now known to be highly toxic, some traditional Chinese medicines still appear to contain high levels of mercury. (7),(8))

In 1759 Adam Braun and Mikhail Lomonosov working in St. Petersburg, Russia obtained solid mercury by freezing a mercury thermometer in a mixture of snow and concentrated nitric acid. This provided strong evidence that mercury had properties similar to other metals. (6)

In 1772 and 1774, Swedish scientist Carl W. Scheele and English chemist Joseph Priestley heated mercury oxide and found it yielded a gas that made a candle burn five times faster than normal – they had discovered oxygen. (9)

Priestley discovered several gases, such as nitrous oxide (laughing gas) because he collected them over a bath of mercury instead of the more usual water. Unlike water, the mercury did not dissolve the gases, leaving them available for discovery. (10)

English chemist Humphry Davy used mercury in other discovery work. For example, Davy isolated calcium for the first time, using a mercury electrode to form an amalgam with the calcium.

A cannonball floats in a bath of mercury.
Cinnabar (mercury ore) is processed to produce liquid mercury.
Mercury is frozen into a solid metal using acetone/dry ice.

Mercury and most of its compounds are highly toxic.

The pure metal is absorbed easily by inhalation, ingestion or through the skin.

It is also a chronic pollutant and mercury concentrates in animal/fish tissues in increasing amounts up the food chain.

Mercury is a dense, silvery-white, poisonous metal with a mirror-like appearance.

Others metals that are liquid near room temperature are gallium, francium and cesium.

The metal is relatively stable in dry air, but in moist air tarnishes slowly to form a gray oxide coating.

Mercury has high surface tension and, when spilled, breaks up into tiny beads.

Mercury readily forms alloys (called amalgams) with other metals, such as silver, gold and tin. As it does not amalgamate with iron, mercury is often stored in iron containers.

Mercury is used in barometers and manometers (instruments for measuring the pressure of gases and liquids), because of its high density.

The metal also has a high rate of nearly linear thermal expansion, so it is used extensively in thermometers.

Its ease in amalgamating with metals is made use of in extracting gold, silver, and platinum from their ores.

It is also used in mercury-vapor lamps (which emit light rich in ultraviolet radiation). These lamps are typically used for street lighting, as sun lamps, and as UV lights (black lights).

Various compounds of mercury are used in medicine, dentistry, cosmetics (mascara) and also in agriculture to make fungicides.

Source: Mercury rarely occurs free in nature, but can be found in ores, mainly mercury sulfide (cinnabar, HgS). The metal is extracted by roasting cinnabar in an air current. The resulting mercury vapor is condensed to collect the liquid metal.