The chemical element tennessine is classed as a halogen. It was discovered in 2009 by a team of scientists led by Yuri Oganessian. 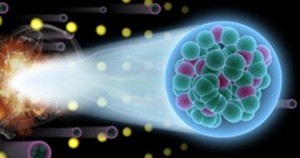 An animation showing how tennessine was synthesized. From Kwei-Yu Chu of the Lawrence Livermore National Laboratory.

The heavy ion cyclotron U-400 in Dubna, where tennessine was synthesized. 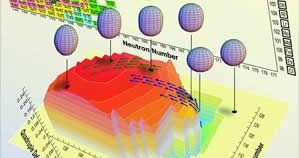 A combination of experiments and computer simulations enable predictions to be made of deformations and shapes of the heaviest elements in and beyond the current periodic table. Photo: ORNL.

In 2009, the first atoms of element 117 were made in the Flerov Laboratory of Nuclear Reactions in Dubna, Russia. Evidence of the synthesis was published in April 2010, by scientific teams from Russia and the United States of America. (1), (2)

Further experiments and analysis later confirmed this result and the discovery was verified by IUPAC in 2015.

The element is named after the Tennessee region, in recognition of the contribution institutions from that American State played in superheavy element research.

Tennessine was made by a fusion reaction of element 20 with element 97: calcium-48 with berkelium-249.

In the first synthesis of tennessine, calcium ions were formed into a beam in a cyclotron (a particle accelerator) and fired at a target layer of berkelium deposited 300 nm thick on titanium foil.

The first bombardment lasted 70 days. The berkelium was bombarded with over 7 trillion calcium-48 ions per second, accelerated to about 10% of the speed of light.

The data showed five nuclei of interest were produced during the 70 day bombardment. As a consequence of the high energy of the impacts that created them, these nuclei instantly lost thermal energy by emitting four neutrons to form tennessine-293.

In a second bombardment lasting 50 days, the speed of the bombarding calcium-48 ions was reduced. The resulting impacts were of lower energy and the single nucleus of interest that formed needed to emit just three neutrons to lose its excess energy, leading to the heavier tennessine-294 isotope. The data showed one atom of tennessine-294 (approximate half-life 78 ms) was formed in the bombardment, decaying again to element 115.

As a result of its position in Group 17 of the periodic table, tennessine is expected to have chemical properties characteristic of the halogens. The effects of relativistic electrons, however, may result in partial metalloid properties.

Too little of the element has been synthesized for its chemical properties to be confirmed.

Jim Roberto from Oak Ridge said: “New isotopes observed in these experiments continue a trend toward higher lifetimes for increased neutron numbers, providing evidence for the proposed ‘island of stability’ for super-heavy nuclei.”

IUPAC has accepted the discoveries of:

completing the seventh row of the periodic table.

Tennessine is harmful due to its radioactivity.

Tennessine is a synthetic radioactive metal and has only been produced in minute amounts.

Tennessine is of research interest only.

Source: Tennessine can be produced by bombarding 249Bk with 48Ca in a heavy ion accelerator.

Isotopes: Initial data has identified 2 isotopes of tennessine, with mass numbers 293 and 294. Neither are stable. Tennessine-293’s approximate half-life is 14 ms and tennessine-294’s is 78 ms.