The chemical element neon is classed as a noble gas and a nonmetal. It was discovered in 1898 by William Ramsay and Morris Travers.

The glow which so excited Ramsay and Travers is from neon. The neon gas in this image is also excited – ionized and emitting light. 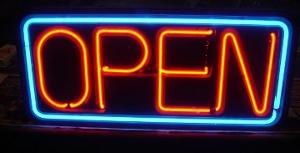 Neon gas spells ‘open’ with the help of a few thousand volts needed to ionize it.

Neon was discovered in 1898 by William Ramsay and Morris Travers at University College London.

This was not the first time Ramsay had discovered a new element.

In 1894, he and Lord Rayleigh had discovered argon. Then, in 1895, Ramsay obtained the world’s first sample of helium. (Cleve and Langlet independently also obtained helium.)

Ramsay was aware an element must sit between helium and argon in the periodic table. But how could he find it?

Having found helium in a radioactive mineral, Ramsay thought it was possible he could find the new element in another such mineral. He and Travers spent some time working with a number of minerals, trying unsuccessfully to drive out some of the as yet undiscovered gas. (1)

Aware of the history of chemistry, Ramsay knew that sometimes one new element can hide another. For example, Berzelius discovered cerium in the mineral that came to be known as cerite. Some years later Mosander, one of Berzelius’s former students, who had continued to study cerite, discovered the new element lanthanum. Lanthanum had been present in the cerite all along, but Berzelius had not found it. Ramsay wondered about the possibility of finding small amounts of the elusive new element hiding in one of his earlier discoveries, argon.

Ramsay and Travers froze a sample of argon using liquid air. They then slowly evaporated the argon under reduced pressure and collected the first gas that came off.

To obtain the gas’s spectrum, Ramsay applied a high voltage to the gas in a vacuum tube and we may reasonably guess that his mouth fell open at what he saw.

Travers later commented, “the blaze of crimson light from the tube told its own story and was a sight to dwell upon and never forget… For the moment the actual spectrum of the gas did not matter in the least, for nothing in the world gave a glow such as we had seen.” (2)

This was the first time anyone had seen the glow of a neon light. Ramsay named the newly discovered element ‘neon’ which is Greek for ‘new.’

Neon glowing in high voltage from Tesla coil.
Glowing neon an exhibition of the Museum of Neon Art.

Neon is not known to be toxic.

Colorless under normal conditions, it glows a reddish-orange in a vacuum discharge tube.

It has the smallest liquid range of any element (2.6 oC).

Neon is also used in high-voltage warning indicators, in Geiger counters and in television tubes.

Liquid neon is used as a cryogenic refrigerant.