The chemical element silver is classed as transition metal. It has been known since ancient times. Its discoverer and discovery date are unknown. 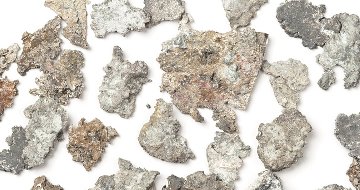 Silver has been in use since prehistoric times. We do not know who discovered it, although the discovery would almost certainly have been of native silver.

Nuggets of native silver metal can be found in minerals and sometimes in rivers; but they are rare. Despite native silver’s rarity, very large pieces of it have been found, such as those found in the early 1900s in Northern Ontario, Canada described as “pieces of native silver as big as stove lids and cannon balls.” (1)

Silver has a special place in the history of the elements because it is one of the first five metals discovered and used by humans. The others were gold, copper, lead and iron.

Silver and lead often appear together in nature, for example in the mineral galena which is mainly lead sulfide. Galena actually looks metallic (see image) and would have caught the eyes of people looking for metals.

The silver objects found in Greece, Turkey and Kish were made of silver that was refined from lead-containing ores such as galena. (Humans have been successful chemists for a surprisingly long time.)

First the ore was smelted under reducing conditions to obtain a mixture of silver and lead. The metals then went through cupellation: the metals were heated to about 1000 oC in a strong stream of air. Under these conditions lead reacts with oxygen forming lead oxide, leaving liquid silver metal floating on top. (3), (4)

Our name for the element is derived from the Anglo-Saxon for silver, ‘seolfor,’ which itself comes from ancient Germanic ‘silabar.’

Silver’s chemical symbol, Ag, is an abbreviation of the Latin word for silver, ‘argentum.’ The Latin word originates from argunas, a Sanskrit word meaning shining. (5)

The historical association between silver and money is still found in some languages. The French word for silver is argent, and the same word is used for money. The Romans used the word ‘argentarius’ to mean banker (silver trader). (6)

Silver is considered to be non-toxic. However, most silver salts are poisonous and some may be carcinogenic.

Silver is a soft, ductile, malleable, lustrous metal. It has the highest electrical and thermal conductivity of all metals.

Silver is stable in oxygen and water, but tarnishes when exposed to sulfur compounds in air or water to form a black sulfide layer.

Silver is used as a food additive/coloring and is given the E number E174.

About 30% of silver produced is used in the photographic industry, mostly as silver nitrate.

Silver is used in solders, electrical contacts, and silver-cadmium and silver-zinc batteries. Silver paints are used in the manufacture of electronic printed circuits.

It is used in superior mirror production, as silver is the best known reflector of visible light, although it does tarnish over time.

Source: Silver is found in elemental form and also in various ores such as argentite (silver sulfide, Ag2S) and horn silver (silver chloride, AgCl). Commercially, the main sources of silver are copper, copper-nickel, gold, lead, and lead-zinc ores. Silver is extracted from the anode waste sludges of electrolytic copper-refining.

Isotopes: Silver has 35 isotopes whose half-lives are known, with mass numbers 94 to 128. Naturally occurring silver is a mixture of its two stable isotopes, 107Ag and 109Ag with natural abundances of 51.8% and 48.2% respectively.