The chemical element xenon is classed as a noble gas and a nonmetal. It was discovered in 1898 by William Ramsay and Morris Travers. 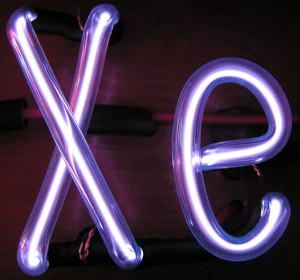 Xenon filled glass tubes in the shape of xenon’s element symbol have several thousand volts applied. This ionizes the xenon, which responds by emitting light. Photo by Pslawinski.

Xenon was discovered in 1898, in London, by William Ramsay and Morris Travers.

They discovered it in the residue remaining after liquid air had been fractionally distilled. Spectroscopic analysis showed the previously unseen beautiful blue lines that indicated the presence of a new element – xenon.

Travers wrote of their discovery, “krypton yellow appeared very faint, the green almost absent. Several red lines, three brilliant and equidistant, and several blue lines were seen. Is this pure krypton, at a pressure which does not bring out the yellow and green, or a new gas? Probably the latter!”

The name comes from the Greek word ‘xenos’, meaning stranger.

William Ramsay received the Nobel Prize for Chemistry in 1904 and also discovered or codiscovered the noble gases helium, neon, argon, and krypton.

Xenon is not considered to be toxic but many of its compounds are toxic as a result of their strong oxidizing properties.

Xenon is inert towards most chemicals.

Many compounds of xenon have now been made, principally with fluorine or oxygen. Both oxides, xenon trioxide (XeO3) and xenon tetroxide (XeO4) are highly explosive.

It is used in instruments for radiation detection, e.g., neutron and X-ray counters and bubble chambers.

Xenon is used in medicine as a general anesthetic and in medical imaging.

Modern ion thrusters for space travel use inert gases – especially xenon – for propellant, so there is no risk of the explosions associated with chemical propulsion.

Source: Xenon is a trace gas in Earth’s atmosphere. It is obtained commercially by fractional distillation of liquid air.