The chemical element boron is classed as a metalloid. It was discovered in 1808 by Joseph L. Gay-Lussac and L. J. Thénard and independently by Sir Humphry Davy. 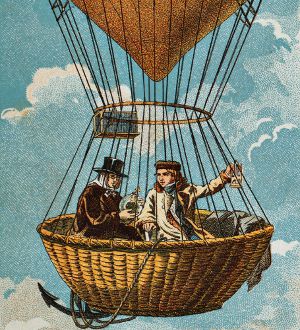 Joseph Louis Gay-Lussac and Jean-Baptiste Biot collecting air samples at different altitudes. In addition to discovering boron, Gay-Lussac discovered that the composition of the atmosphere does not change with increasing altitude.

Boron compounds such as borax (sodium tetraborate, Na2B4O7·10H2O) were known and used by ancient cultures for thousands of years. Borax’s name comes from the Arabic buraq, meaning “white.”

Boron was first partially isolated in 1808 by French chemists Joseph L. Gay-Lussac and L. J. Thénard and independently by Sir Humphry Davy in London. Gay-Lussac & Thénard reacted boric acid with magnesium or sodium to yield boron, a gray solid. (1) They believed it shared characteristics with sulfur and phosphorus and named it bore. (2)

Davy first tried to produce boron by electrolysis of boric acid, but was not satisfied with the results. He enjoyed greater success reacting boric acid with potassium in a hydrogen atmosphere. The result was a powdery substance.

Davy commented the substance was, “of the darkest shades of olive. It is opake, very friable, and its powder does not scratch glass.” After carrying out a number of chemical reactions to verify the uniqueness of the substance, Davy wrote, “there is strong reason to consider the boracic basis as metallic in nature, and I venture to propose for it the name of boracium.” (2)

Neither party had, in fact, produced pure boron. Their samples were only about 60% pure.

Almost a century later, in 2004, Jiuhua Chen and Vladimir L. Solozhenko produced a new form of boron, but were uncertain of its structure.

In 2009, a team led by Artem Oganov was able to demonstrate the new form of boron contains two structures, B12 icosohedra and B2 pairs. (3) Gamma-boron, as it has been called, is almost as hard as diamond and more heat-resistant than diamond.

Talking about boron’s part metal, part non-metal properties, Oganov said, “Boron is a truly schizophrenic element. It’s an element of complete frustration. It doesn’t know what it wants to do. The outcome is something horribly complicated.” (4)

Boron compounds burn with a green flame. The distinctive color leads to use in fireworks.
Boron is an ionic element – pure boron can exist as a mixture of positive and negative boron ions.

Elemental boron is not known to be toxic.

Boron is a metalloid, intermediate between metals and non-metals. It exists in many polymorphs (different crystal lattice structures), some more metallic than others. Metallic boron is extremely hard and has a very high melting point.

Although opaque to visible light, boron can transmit portions of infrared light.

Boron is a poor room temperature conductor of electricity but its conductivity improves markedly at higher temperatures.

Boron is used to dope silicon and germanium semiconductors, modifying their electrical properties.

Boron oxide (B2O3) is used in glassmaking and ceramics.

Borax (Na2B4O7.10H2O) is used in making fiberglass, as a cleansing fluid, a water softener, insecticide, herbicide and disinfectant.

Boric acid (H3BO3) is used as a mild antiseptic and as a flame retardant.

Boron Nitride’s hardness is second only to diamond, but it has better thermal and chemical stability, hence boron nitride ceramics are used in high-temperature equipment.

Source: Boron compounds are usually is found in sediments and sedimentary rock formations. The chief sources of boron are Na2B4O6(OH)2.3H2O – known as rasorite or kernite; borax ore (known as tincal); and with calcium in colemanite (CaB3O4(OH)4.H2O). Boron also occurs as orthoboric acid in some volcanic spring waters.

Isotopes: 11 whose half-lives are known, with mass numbers 7 to 17. Naturally occurring boron is a mixture of its two stable isotopes and they are found in the percentages shown: 10B (19.9%) and 11B (80.1%). 10B is used in nuclear reactors as a neutron-capturing substance.