The chemical element rutherfordium is classed as a transition metal. It was discovered in the 1960s by a team of scientists led by Georgy Flerov.

Rutherfordium was made using the U300 cyclotron in Dubna, Russia. This is part of the more recent U400, used in the first ever synthesis of flerovium and livermorium. Image by Jim Roberto, Oak Ridge National Laboratory.

Rutherfordium was the first transactinide or super-heavy element to be discovered.

Rutherfordium may first have been synthesized in 1964 when a team of scientists at Dubna, Russia, led by Georgy Flerov, bombarded a plutonium target with neon ions.

The researchers calculated that isotope 259 had been created.

The discovery was not universally accepted and the synthesis was repeated at Dubna in 1966, which confirmed the 1964 results.

The researchers at Dubna suggested the name kurchatovium (Ku) for the newly discovered element after Igor Kurchatov, a Russian nuclear physicist.

In 1969, a team of scientists at the University of California, Berkeley led by Albert Ghiorso also attempted to synthesize rutherfordium.

They had no success with repeating the Russian experiment but they successfully synthesized rutherfordium by bombarding a californium target with carbon-12 and carbon-13 ions.

They suggested the name rutherfordium (Rf) after Ernest Rutherford, who is known as the father of nuclear physics and nuclear chemistry.

The Council of the International Union of Pure and Applied Chemistry (IUPAC) decided in 1992 that both Berkeley and Dubna scientists should share the credit of the discovery and that the element would be called Rutherfordium. 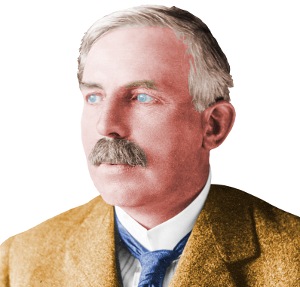 Rutherfordium is named after Ernest Rutherford, who is known as the father of nuclear physics and nuclear chemistry.

Rutherfordium is harmful due to its radioactivity.

Rutherfordium is a synthetic radioactive metal created by nuclear bombardment. It has only been produced in miniscule amounts. It is expected to have similar characteristics to hafnium and zirconium.

Research studies of 267Rf (which has a half-life of 65 seconds) demonstrated that rutherfordium forms 4+ ions when in water.

Rutherfordium is of research interest only.

Isotopes: Rutherfordium has 15 isotopes whose half-lives are known, with mass numbers from 253 to 268. None are stable. The most stable isotope is 267Rf, with a half-life of 1.3 hours.