The chemical element lutetium is classed as a lanthanide and rare earth metal. It was discovered in 1907 by Carl Auer von Welsbach, Charles James, and Georges Urbain.

Lutetium was the last natural rare earth element to be discovered. The synthetic rare earth promethium was produced later in the laboratory from uranium fission products.

The discovery echoed other rare earth discoveries in which a new element was discovered in minerals that had already been analyzed. For example, Carl Gustaf Mosander discovered lanthanum in cerite – which was thought to contain the rare earth element cerium and no others. Mosander went on to discover erbium and terbium in the mineral gadolinite, which had been analyzed, but the presence of erbium and terbium had been missed.

French chemist Georges Urbain successfully separated lutetium from ytterbia in 1907 in Paris. He separated ytterbia into two constituents by a series of fractional crystallizations of ytterbium nitrate from nitric acid solution and obtained two rare earth oxides. One retained the name of ytterbium, the other he called lutecium which was later changed to lutetium. (1),(2)

His fractional crystallization process was considered be the best technique of separating rare earths until the discovery of ion exchange techniques in the 1940s. (4)

The element name lutetium comes from Lutetia, the Latin name for Paris. 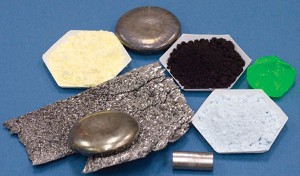 Getting high purity research quality rare-earth metals is a multiple-step process. First rare-earth oxides, like the yellow (cerium), black (praseodymium) and blue (neodymium) powders in the dishes are exposed to hydrogen fluoride gas. This turns the powder into a crystalline fluoride, such as the green praseodymium fluoride crystal (far right). A reduction reaction and further processing turns the rare-earth fluorides into their final, pure metal forms, (from top center) scandium disc, dysprosium disc resting on a sheet of sublimated dysprosium and gadolinium cylinder. Gadolinium, terbium and lutetium are more difficult to refine because they react with tantalum (the crucible material). Additional steps are taken to remove the tantalum that leaches from the crucible. Photo: Ames Laboratory

Lutetium is considered to be non toxic.

The metal tarnishes slowly in air and burns at 150 oC to the oxide.

It is the densest and hardest of the lanthanides.

It is also one of the least abundant lanthanides, however it is still more abundant on earth than silver or gold.

When present in compounds, lutetium exists usually in the trivalent state ,Lu3+. Most of its salts are colorless.

Lutetium oxide is used to make catalysts for cracking hydrocarbons in the petrochemical industry.

177Lu is used in cancer therapy and because of its long half-life, 176Lu is used to date the age of meteorites.

Lutetium oxyorthosilicate (LSO) is currently used in detectors in positron emission tomography (PET). This is a noninvasive medical scan that creates a three-dimensional image of the body’s cellular activity.

Abundance earth’s crust: 0.6 parts per million by weight, 70 parts per billion by moles

Source: Lutetium is not found free in nature but is found in a number of minerals, mainly monazite. Historically, isolation of the rare earth elements from each other has been difficult and expensive because their chemical properties are so similar. Ion exchange and solvent extraction techniques developed since the 1940’s have lowered the cost of production. Pure lutetium metal is produced by the reduction of the anhydrous fluoride with calcium metal.

Isotopes: Lutetium has 35 isotopes whose half-lives are known, with mass numbers 150 to 184. Naturally occurring lutetium is a mixture of two isotopes 175Lu and 176Lu with natural abundances of 97.4% and 2.6% respectively.