The chemical element fermium is classed as an actinide metal. It was discovered in 1952 by teams of scientists led by Albert Ghiorso. 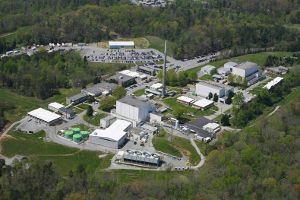 Fermium was the eighth synthetic transuranium element of the actinide series to be discovered.

It was discovered unexpectedly along with einsteinium in debris from the first hydrogen bomb test, codenamed ‘Mike’, which took place in the Pacific on October 31 1952.

The debris was collected on filter papers attached to drone airplanes that flew through the explosion area. Later, to obtain more material, many hundreds of pounds of coral from the blast area were examined.

Fermium was identified by chemical analysis with only about 200 atoms. (1) 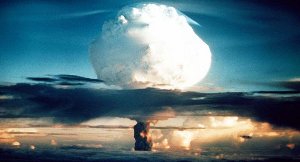 The first hydrogen bomb test ‘Mike’, which produced the world’s first known atoms of fermium in 1952.

The new element was produced by nuclear fission of 17 neutrons with uranium-238 (which then underwent eight beta decays). (2)

The results were not published and kept secret until 1955.

In 1954 researchers from the Nobel Institute of Physics in Stockholm produced fermium-250 by bombarding uranium-238 with oxygen-16 ions.

The element was named after the nuclear physicist Enrico Fermi.

Fermium is harmful due to its radioactivity.

Fermium is a synthetic, highly radioactive metal and has only been produced in miniscule amounts.

Under normal conditions, it behaves in aqueous solution as expected for a trivalent actinide ion.(3)

Fermium metal has not been prepared. (3)

Fermium is of scientific research interest only.

Source: Fermium is a synthetic element and is not found naturally. It is produced in nuclear reactors in miniscule amounts from the neutron bombardment of plutonium by a long series of neutron capture reactions.(2)