The chemical element rubidium is classed as an alkali metal. It was discovered in 1861 by Robert Bunsen and Gustav Kirchhoff. 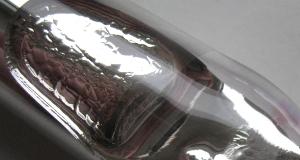 Rubidium in a glass tube. Image by Dennis S.K (1).

Basic flame emission spectra of the kind that Bunsen and Kirchoff might have seen. The top spectrum is potassium, with the distinctive violet line. In the case of rubidium, the twin ruby red lines farther into the red part of the spectrum than Bunsen and Kirchoff had ever seen before indicated the presence of a new element.

Rubidium was discovered in 1861, in Heidelberg, Germany, by Robert Bunsen and Gustav Kirchhoff using spectroscopy, the method the pair had invented and developed in the previous two years.

At the heart of the spectroscope lay a glass prism, which split light coming from a flame into a spectrum – much in the same way that raindrops can split sunlight into a rainbow. The spectroscope magnified the spectrum to allow it to be studied in detail.

When Bunsen and Kirchhoff placed different salts in the flame of the recently invented Bunsen burner, they saw colored lines in each of the spectra they took.

Excitingly, they discovered that these colored lines were unique to whichever substance was burnt. The lines in a spectrum were a way of ‘fingerprinting’ an element.

Bunsen and Kirchoff had discovered cesium in 1860 when they analyzed the spectrum of mineral water.

In 1861 they began studying the mineral lepidolite (a lithium, potassium and aluminum silicate) which had been found in Saxony, Germany. (2)

Placing this salt in the Bunsen burner, they saw its spectrum contained many new lines. Two of these lines were particularly outstanding.

In their notes Bunsen and Kirchoff wrote: “None of the lines belong to any previously known body. Amongst them are two which are particularly remarkable in lying beyond Fraunhofer’s line in the outermost portion of the red solar spectrum. Hence we propose for this new metal the name rubidium (and the symbol Rb) from the Latin rubidius which was used to express the darkest red color.” (3)

Bunsen was able to extract rubidium metal from its chloride salt by electrolysis. He found that the metal was more electropositive than potassium and decomposed water releasing hydrogen. (4)

The rubidium concentration in the lepidolite had been so tiny that Bunsen and Kirchoff needed to process 150 kilograms (330 lb) of the ore to extract enough metal to study its properties. (2)

Rubidium’s Periodic Table Neighborhood
Rubidium behaves like a typical Group 1 metal. It is soft and reacts violently with water. Rubidium follows potassium in Group 1, so its reactions are more violent than potassium’s. Rubidium becomes liquid at 39.3 oC (102.7 oF) – a little higher than your body temperature.

Rubidium (and then cesium) reacting with water.

Rubidium atoms came together in 1995 to form the first ever Bose-Einstein condensate. Within 170 billionths of a degree of absolute zero, about two thousand individual rubidium atoms came together to form a single giant atom, which behaved as a single species. The left image shows the situation before the condensate formed. On the right, the white and blue colors show the high density of the giant atom. Eric Cornell, Carl Wieman and Wolfgang Ketterle won the 2001 Nobel Prize in Physics for their achievements in making Bose Einstein condensates.

Harmful effects:
Rubidium is not known to be toxic.

Characteristics:
Rubidium is a soft, silvery-white metallic element. It is solid at room temperature but melts easily, at 39.3 oC.

Like the other group 1 metals, rubidium reacts violently with water, forming corrosive rubidium hydroxide (RbOH) and hydrogen gas, which is ignited by the heat of the reaction.

Rubidium can also ignite spontaneously in air. It forms alloys with cesium, gold, sodium, and potassium and it forms amalgams with mercury.

Rubidium is used in photocells, as a getter (remover of trace gases) in vacuum tubes and as working fluid in vapor turbines.

Rubidium-87 is slightly radioactive and has been used extensively in dating rocks.

Rubidium compounds give a purple color in fireworks.

Rubidium salts are used in glasses and ceramics.

Source: The main ore of rubidium is lepidolite which contains 1.5% rubidium. Rubidium is usually obtained as a by product of lithium production. Rubidium metal can also be produced by reducing rubidium chloride with calcium.

Isotopes: Rubidium has 29 isotopes whose half-lives are known, with mass numbers 74 to 102. Naturally occurring rubidium is a mixture of two isotopes, 85Rb and 87Rb with natural abundances of 72.2% and 27.8% respectively.