The chemical element aluminum is classed as an other metal. It was discovered in the 1750s by Andreas Marggraf.

Louis de Morveau believed a new metal could be discovered in the oxide alumina. He was right, but he was unable to isolate it. De Morveau devised the first systematic method of naming chemicals, and, as we can see, he was a pioneering balloonist.

People have used alum since ancient times for dyeing, tanning and to stop bleeding. Alum is potassium aluminum sulfate.

In the 1750s German chemist Andreas Marggraf found he could use an alkali solution to precipitate a new substance from alum. Marggraf had previously been the first person to isolate zinc in 1746.

De Morveau believed alumina contained a new metallic element, but, like Marggraf, he was unable to extract this metal from its oxide. (1), (2)

In 1807 or 1808, English chemist Humphry Davy decomposed alumina in an electric arc to obtain a metal. The metal was not pure aluminum, but an alloy of aluminum and iron.

Davy called the new metal alumium, then renamed it aluminum. (3)

Aluminum was first isolated in 1825 by Hans Christian Ørsted (Oersted) in Copenhagen, Denmark who reported, “a lump of metal which in color and luster somewhat resembles tin.”

Ørsted produced aluminum by reducing aluminum chloride using a potassium-mercury amalgam. The mercury was removed by heating to leave aluminum.

In 1856 Berzelius stated that it was Wöhler who had succeeded in 1827. Wöhler is therefore usually given credit for the discovery.

More recently, Fogh repeated the original experiments and has shown that Ørsted’s method can give satisfactory results.

This has strengthened the priority of Ørsted’s original work and his position as discoverer of aluminum. (4)

For almost three decades, aluminum remained a novelty, expensive to produce and more valuable than gold, until in 1854 Henri Saint-Claire Deville in Paris, France found a way of replacing potassium with much cheaper sodium in the reaction to isolate aluminum. Aluminum then became more popular but, because it was still quite expensive, was used in ornamental rather than practical situations.

Aluminum is the most abundant metal in our planet’s crust: only oxygen and silicon are more abundant. Image by USGS. 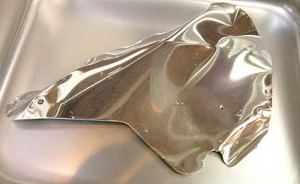 The aluminum collector from the Genesis spacecraft. The aluminum accumulated fast moving noble gas species from the solar wind; these species impacted and stuck within the metal. The spacecraft returned to Earth and the noble gases were analyzed to learn about the origins of the Solar System. Image by NASA/JSC.

No proven issues; ingestion may cause alzheimer’s disease

Aluminum is a silvery-white metal. It does not stick to magnets (it is paramagnetic and so its magnetism under normal conditions is very, very weak). It is an excellent electrical conductor. It is of low density and high ductility. It is too reactive to be commonly found as the metal although, very rarely, the native metal can be found. (8)

Aluminum’s appearance is dulled and its reactivity is passivated by a film of aluminum oxide that naturally forms on the surface of the metal under normal conditions. The oxide film results in a material that resists corrosion. The film can be thickened using electrolysis or oxidizing agents and aluminum in this form will resist attack by dilute acids, dilute alkalis and concentrated nitric acid.

Aluminum lies sufficiently far on the right side of the periodic table that it shows some hints of nonmetal behavior, reacting with hot alkalis to form aluminate ions [Al(OH)4]– as well as the more typical metal reaction with acids to release hydrogen gas and form the positively charged metal ion, Al3+. i.e. aluminum is amphoteric.

Pure aluminum is quite soft and lacking in strength. Aluminum used in commercial applications has small amounts of silicon and iron (less than 1%) added, resulting in greatly improved strength and hardness.

As a result of its low density, low cost, and corrosion resistance, aluminum is widely used around the world.

It is used in an extensive range of products from drinks cans to window frames and boats to aircraft. A Boeing 747-400 contains 147,000 pounds (66,150 kg) of high-strength aluminum.

Unlike some metals, aluminum has no aroma – hence its widespread use in food packaging and cooking pots.

Although not quite as good as silver or copper, aluminum is an excellent electrical conductor. It is also considerably cheaper and lighter than these metals, so it is used widely in overhead power lines.

Of all the metals, only iron is used more widely than aluminum.

Isotopes: 15 whose half-lives are known, mass numbers 22 to 35. Of these, only two occur naturally: 27Al, which is stable, and 26Al, which is radioactive with half-life is 7.17 x 105 years. 26Al is formed by cosmic-ray bombardment of argon in Earth’s atmosphere.