The chemical element barium is classed as an an alkali earth metal. It was discovered in 1774 by Carl W. Scheele. 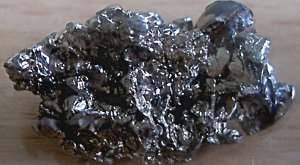 Barium was first discovered in barite, also known as barium sulfate. This mineral attracted attention in the 17th century, when it was found to radiate red light after heating. Image from Missouri Dept. of Natural Resources. 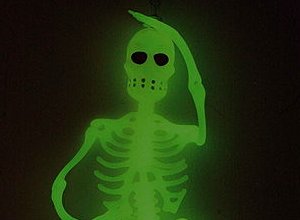 When Vincentius Casciorolus saw rocks that glowed in the dark, he thought he might be looking at the philosopher’s stone. Nowadays, nearly everyone has seen phosphorescent materials in action. Image by Luu Ly.

In the early 1600s, Vincentius Casciorolus, a shoemaker with an interest in alchemy, was excited. He had learned there was a heavy, silvery-white mineral with remarkable properties in the mountains near Bologna, Italy. Perhaps, he thought, it might even be the philosopher’s stone.

When the mineral was heated and combusted, its product emitted a phosphorescent red glow – very neat. But what really excited Casciorolus – and others – was that if the combusted material was exposed to sunshine, it would glow in the dark for up to an hour afterwards.

Sadly for Casciorolus, although this material’s properties were interesting, it proved useless as a means of making gold from other metals and failed to make him immortal. Rather than ‘philosopher’s stone’ it became known as ‘Bologna stone’ – a curiosity.

Sadly, also, no-one took the opportunity to discover the new element present in Bologna stone. Of course, at the time, nobody suspected there were any new elements to be discovered!

A comparison was made with Bologna stone, and the two were found to contain the same substance. (Until this point, people had thought Bologna stone was a compound of calcium. (2))

Barium metal was isolated for the first time in 1808 by English chemist Sir Humphrey Davy in London. Davy followed the advice of Swedish chemist Jacob Berzelius, who had told him that barium sulfate could be decomposed by electrolysis. This was correct, and Davy isolated strontium in a similar way. The experimental details are on our strontium page.

The element was called barium because it was found in barite (barium sulfate) a mineral given its name because of its high density. The Greek ‘barys’ means heavy.

Barium sits close to the bottom of the periodic table’s Group 2. It is Group 2’s final stable element. Radium, which follows, is radioactive. Group 2 elements are sufficiently reactive that the free metals are never found naturally; they are, however, much less reactive that Group 1 metals. In general, reactivity increases as one looks down Group 2; so barium is more reactive than strontium and calcium, for example.
Barium is used in medicine to detect abnormalities in the digestive system.
The reaction between ammonium thiocyanate and barium hydroxide octahydrate is endothermic. As a result, the temperature will drop quickly. This causes the beaker to freeze to the wooden board.

Barium compounds that are water or acid soluble are highly poisonous. Barium powder can ignite spontaneously in air.

Barium sulfate, used in x-ray imaging, is highly insoluble in water, and is therefore nontoxic and completely removed from the digestive tract.

Barium is a metallic element chemically resembling calcium but more reactive. It is a soft, silvery metal and when cut it quickly turns a black color due to the formation of barium oxide, (BaO).

It is also highly reactive with water or alcohol.

When present in compounds barium exists usually in the Ba2+, divalent state.

Barium dissolves in most aqueous acids. The exception is sulfuric acid, due to the formation of an insoluble protective layer of barium sulfate.

Barium is used as a “flashed getter” in vacuum tubes to remove the last traces of gases.

An alloy of barium with nickel is used in sparkplug wire.

Barium sulfate (barite) is used to increase the contrast in x-ray imaging of the digestive system.

Of the radioactive isotopes, 133Ba is the longest lived with a half-life of 10.51 years.