The chemical element yttrium is classed as a transition metal and rare earth metal. It was discovered in 1794 by Johan Gadolin.

Rocket combustion chamber. The silver-colored lining is an alloy of nickel,chromium, aluminum and yttrium. Photo: NASA.

Yttrium is used in many applications, such as cubic zirconia gems, computer monitors, camera lenses and energy-efficient lighting.

The story of yttrium’s discovery begins in 1787, when Carl Arrhenius found a coal-like mineral in a feldspar/quartz mine near Ytterby, Sweden. The mine had been developed in the early 18th century as a result of the mineral requirements of the local pottery industry.

Arrhenius called the black mineral ytterbite after Ytterby. Bengt Geijer, the inspector of mines in Stockholm, carried out a rough analysis of ytterbite. He reported that the mineral contained iron and speculated that it might also contain tungsten. (1), (2)

Johan Gadolin received a ytterbite sample from Arrhenius and carried out a detailed analysis of it in 1794, in Finland. He found it contained 31% silica, 19% alumina, 12% iron oxide and 38% of an unknown earth. (3)

Gadolin’s results were confirmed in 1797 by Swedish chemist Anders Ekeberg. Ekeberg suggested the name yttria for the oxide of the new earth metal and hence the new metal was named yttrium. (2)

Unfortunately Gadolin and Ekeberg did not realize that their alumina analyses were incorrect. The substance they identified as alumina was actually the oxide of another new element, beryllium.

Beryllium was discovered a year later, in 1798, by French chemist Nicolas Louis Vauquelin. Ekeberg then confirmed beryllium oxide was present in ytterbite and alumina was absent. (2)

Ytterbite was renamed gadolinite (a yttrium-iron-beryllium-silicate mineral) in 1800 by Martin Klaproth in honor of John Gadolin.

Gadolin tested the properties of yttria (yttrium oxide) in detail and found it did not melt even at the highest temperatures of the blowpipe; it also formed a clear colorless glass with borax. (3) (These were to be typical properties of all the rare earth metal oxides.)

Yttrium was the first rare earth element to be discovered. We now know Gadolin’s yttria was impure; in addition to yttrium oxide, it contained eight other rare earth metal oxides. These were discovered separately in later years; these metals were: erbium, terbium, ytterbium, scandium, thulium, holmium dysprosium, and lutetium.

Yttrium metal was first obtained in 1828, in Berlin, by Friedrich Wöhler as a gray powder by heating anhydrous yttrium (III) chloride with potassium. (4)

The metal was produced with high purity in 1953 by Frank Spedding at Ames Laboratory, in Iowa, using ion exchange techniques. (5) 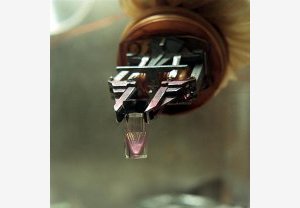 Ultra-pure yttrium-90 is used for cancer therapy. Yttrium-90 is produced by high-purity separation from strontium-90, a fission product of uranium in nuclear reactors. Photo: PNNL 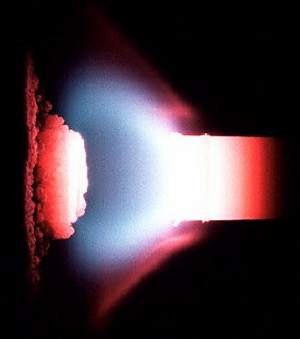 Yttrium is a soft, silvery metal. Yttrium usually exists as a trivalent ion, Y3+, in its compounds. Most of its compounds are colorless.

It is relatively stable in air as a result of an oxide film which forms on its surface.

The finely divided metal ignites in air when heated.

Yttrium has an exceptionally high affinity for oxygen, with a free energy of formation for the oxide of 1817 kJ mol-1, probably the greatest of any element. Yttrium also dissolves oxygen gas in relatively high concentrations. (7), (8)

Yttrium is often used in alloys, increasing the strength of aluminum and magnesium alloys.

It is also used as a deoxidizer for non-ferrous metals such as vanadium.

Yttrium is used as a catalyst in ethylene polymerization.

Yttrium-90, a radioactive isotope, is used in treatments for various cancers and is used in precision medical needles to sever pain-transmitting nerves in the spinal cord.

Yttrium oxide is the most important compound of yttrium. It is used to make the high-temperature superconductor YBCO (yttrium barium copper oxide). This substance becomes superconducting at -178 oC (meaning that it can be kept in a superconducting state using liquid nitrogen, rather than more expensive and more difficult to handle liquid helium).

Yttrium oxide is also used to make yttrium iron garnets (Y3 Fe5O12) which are very effective microwave filters, blocking some microwave frequencies, while allowing others through in communication devices such as satellites.

Yttrium doped with europium is used to produce phosphors, which provide the red color in color television tubes.

Source: Yttrium occurs in uranium ores and is present in nearly all the ‘rare earth’ minerals. It is recovered commercially by counter-current liquid-liquid extraction processes from monazite sand and bastnaesite. The metal can be isolated by reduction of the fluoride with calcium metal.

Isotopes: Yttrium has 25 isotopes whose half-lives are known, with mass numbers 79 to 103. Naturally occurring yttrium consists of its one stable isotope, 89Y.