The chemical element thorium is classed as an actinide metal. It was discovered in 1828 by Jöns Jacob Berzelius.

Thorium was discovered by Jöns Jacob Berzelius in 1828, in Stockholm, Sweden after he received a sample of an unusual black mineral from Hans Esmark found on an island close to Brevik, Norway.

The mineral contained a large number of known elements including iron, manganese, lead, tin and uranium plus another substance Berzelius could not identify.

He concluded that the mineral contained a new element.

He called the black mineral thorite, in honor of the Scandinavian god Thor.

His analysis indicated that 57.91% of thorite was an oxide of the proposed new element, which he called thorium. (1)

Berzelius’s isolation of thorium from its chloride using potassium was similar to the approach used by Wöhler and Bussy to isolate beryllium in 1828 and by Ørsted to isolate aluminum in 1825.

Thorium was discovered to be radioactive by Gerhard Schmidt in 1898 – the first element after uranium to be identified as such.

In the early 1900s Ernest Rutherford and Frederick Soddy found that thorium decayed into other elements at a fixed rate – a key discovery in our understanding of the radioactive elements. (4), (5)

Prior to his discovery of thorium, Berzelius had discovered two other elements, cerium in 1803 and selenium in 1817.

Jöns Jacob Berzelius. A portrait from the Royal Swedish Academy of Sciences 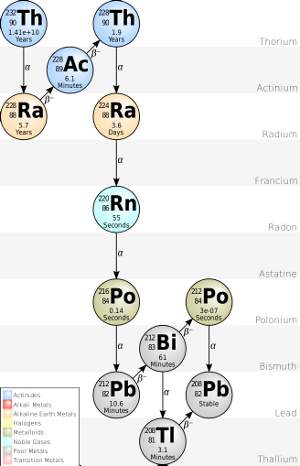 Thorium-232 decay chain. This is what thorium does naturally. If, however, we bombard it with neutrons we can make uranium-233, from which we can generate nuclear energy.(Photo: BatesIsBack)

Thorium is radioactive. It collects in living animal bones, including human bone, where it can remain for a long period of time. (7)

Thorium is a radioactive, bright, soft, silvery-white metal, which tarnishes extremely slowly (over many months) to the black oxide. The most stable isotope is thorium-232, with a half-life of 14.05 billion years. Nearly 100% of thorium found on Earth is thorium-232, which is only slightly radioactive because it has such a long half-life. (Uranium-235’s half-life is 700 million years, shorter by a factor of 20.)

Thorium is chemically reactive and is attacked by oxygen, hydrogen, the halogens and sulfur. (6) Thorium powder is pyrophoric (ignites spontaneously in air). (7)

Thorium dioxide (thoria) has the highest melting point of any known oxide.

Almost all naturally occurring thorium is thorium-232 which decays slowly to the Group 2 metal radium by emission of alpha particles.

Thorium-232 can be converted by thermal (slow) neutrons to fissionable uranium-233 via the following reaction sequence:

Fission of the uranium-233 can provide neutrons to start the cycle again. This cycle of reactions is known as the thorium cycle. (6)

An exciting possibility for the future is fueling nuclear reactors with thorium. Not only is thorium more abundant on Earth than uranium, but 1 ton of mined thorium can produce as much energy as 200 tons of mined uranium. (8)

Waste from a thorium reactor is expected to lose its dangerous radioactivity after about 400-500 years, compared with many thousands of years for nuclear waste produced today. (8)

Thorium fuel research is continuing in several countries including the USA and India. (9)

Most non-nuclear uses of thorium are driven by the unique properties of its oxide.

Thorium dioxide was used in Welsbach gas mantles in the 19th century and today these mantles may still be found in camping lanterns. (Thorium dioxide’s very high melting point ensures it stays solid, glowing with an intense, bright white light at the temperature of the lantern’s burning gas.)

Glass that contains thorium dioxide has a high refractive index and low dispersion, so thorium dioxide is added to glass for use in high quality lenses and scientific equipment.

Thorium-magnesium alloys are used in the aerospace industry for aircraft engines. These alloys are lightweight and have excellent strength and creep resistance at high temperatures.

Thorium is used to coat tungsten filaments in light bulbs.

The demand for thorium in non-nuclear applications is decreasing because of environmental and health concerns due to its radioactivity.

Abundance solar system: 0.3 parts per billion by weight, 2 parts per trillion by moles

Source: Thorium is not found free in nature but is found in a number of minerals: mainly monazite and bastnasite. Commercially thorium is extracted from monazite sand (phosphate mineral). The chemical inertness of monazite makes extraction a complex and multi-stage process. (6)

Thorium metal can be isolated by electrolysis of the anhydrous thorium chloride with calcium.

Isotopes: Thorium has 28 isotopes whose half-lives are known, with mass numbers 210 to 237. All are radioactive. The most stable isotope is 232Th, with a half-life of 14.05 billion years and an abundance of virtually 100%.