The chemical element platinum is classed as a transition metal. It was discovered by South American peoples. 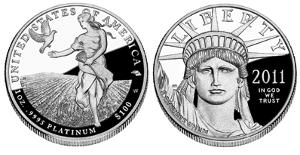 Both sides of a platinum eagle coin.

Platinum was discovered by South American peoples who produced artifacts of a white gold-platinum alloy.

The first written account of platinum was from Julius C Scaliger in 1557. He describes it as a strange metal found in mines between Panama and Mexico and wrote that no fire or any of the Spanish arts could melt it.

In 1783 French chemist Francois Chabaneaus discovered and patented a method of producing workable platinum. However the quality of the metal was still very inconsistent from batch to batch – unknown to him, there were impurities of, as then, undiscovered metals.

English chemist William H Wollaston developed a commercial process for producing pure platinum in the early 19th century. In the course of his studies on platinum ores he also discovered the metals osmium, iridium, rhodium and palladium – the elements which had made Chabaneaus’ work so frustrating.

Platinum acts as a catalyst for the decomposition of hydrogen peroxide into water and oxygen. Since platinum is acting as a catalyst, it is not consumed in the reaction.
Platinum’s history and properties.

Platinum is considered to be non-toxic.

Platinum is a precious metal; soft, silvery-white, and dense with a beautiful lustrous sheen.

Platinum is malleable and ductile and has a high melting point.

It does not oxidize in air even at high temperatures and is unaffected by common acids.

It is also corroded by halogens, cyanides, sulfur, and caustic alkalis.

Platinum is widely used as a catalyst for chemical reactions. The most important use of platinum is in vehicles, as a catalytic converter, facilitating the complete combustion of unburned hydrocarbon passing through the exhaust.

Platinum is used in jewelry, decoration and dental work. The metal and its alloys are also used for electrical contacts, fine resistance wires and medical / laboratory instruments.

An alloy of platinum and cobalt is used to produce strong permanent magnets.

The metal is also used to make electrodes sealed in glass (as its thermal coefficient of expansion is almost equal to that of glass).

Source: Platinum is an extremely rare metal and can be found uncombined in alluvial deposits often accompanied by small amounts of other platinum family metals. A major source of platinum is the ore sperrylite (PtAs2). It is also found in the mineral cooperite (PtS). Platinum is also produced commercially as a by-product of nickel refining from copper-nickel ores.