The chemical element zirconium is classed as a transition metal. It was discovered in 1789 by Martin Heinrich Klaproth.

Precious stones containing zirconium, such as hyacinth and zircon, have been used as decorations since ancient times.

Zirconium was first recognized as an element by Martin Heinrich Klaproth in 1789, in Berlin, in a sample of zircon (zirconium silicate) from Sri Lanka. His analysis of the mineral’s composition showed: 25% silica; 0.5% iron oxide; 70% new oxide. He called the new oxide ‘Zirconerde.’ (2)

In 1808, in London, Sir Humphry Davy tried to obtain the pure metal from its oxide by electrolysis, a method he had successfully used to isolate both sodium and potassium a year earlier. Unfortunately he was unsuccessful in his efforts.

Success came to Jacob Berzelius, who first isolated the metal in 1824, in Stockholm, Sweden. Berzelius heated an iron tube containing a mixture of potassium and potassium zirconium fluoride (K2ZrF6). He produced zirconium as an amorphous black powder which was a poor conductor of electricity. (3) 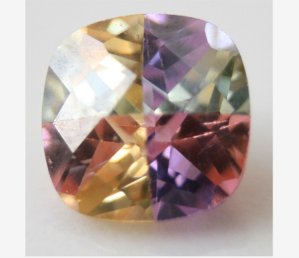 Cubic zirconia (shown above) has the same crystal structure as diamond, and has a similar sparkle. Image by Michelle Jo.

NASA: An electromagnetically levitated ball of molten titanium-zirconium-nickel alloy. As the floating liquid ball cools and solidifies, it reveals information about why liquids resist turning into solids.

Zirconium is considered to be non-toxic.

When present in compounds, zirconium exists mostly in the oxidation state IV.

Its oxide (ZrO2) is white, like many of its compounds.

Zirconium is generally exceptionally resistant to corrosion. It is however rapidly attacked by hydrofluoric acid, even at low concentrations.

In an oxygen atmosphere, finely divided Zirconium burns with the highest known temperature for a metal flame: 4460 oC.(4) Powdered zirconium can spontaneously ignite in air.

Zirconium tungstate (ZrW2O8) is an unusual substance: it shrinks when heated from near absolute zero to 780 oC(5).

Zirconium is very poor at absorbing neutrons. It is therefore useful in nuclear energy applications such as in the cladding (outer layer) of fuel rods through which it is important that neutrons can travel easily.

Zirconium is used as to make surgical instruments and is used in steel alloys as a hardening agent.

As a result of its exceptional corrosion resistance, zirconium is used extensively in the chemical industry in corrosive environments where zirconium’s alloys can be found in pipes, fittings and heat exchangers.

Zircon (zirconium silicate, ZrSiO4) is a natural gemstone and synthetic cubic zirconia (zirconium dioxide, ZrO2) is produced as a low-cost substitute for diamond.

Zirconium based catalysts are used in amination, hydrogenation, isomerization and oxidation reactions.

Source: Its chief mineral is zircon (zirconium silicate, ZrSiO4). It is produced commercially by reduction of the chloride with magnesium in the Kroll process.