The chemical element rhodium is classed as a transition metal. It was discovered in 1803 by William H. Wollaston. 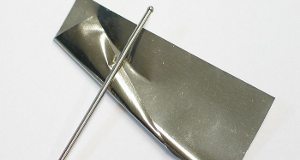 Rhodium was discovered in 1803, in London, by English chemist William H. Wollaston, when examining a platinum ore from Peru. (1)

Wollaston was first alerted to the possibility of a new element by Hippolyte-Victor Collet-Descotils, who believed that the red color of some platinum salts was actually caused by the presence of an unidentified metal. (2)

To investigate this possibility, Wollaston first dissolved crude platinum in aqua regia, a concentrated solution of hydrochloric and nitric acids. He then precipitated platinum metal by dissolving the solution in ammonium chloride.

The liquid which remained had properties which matched no known substance. (2)

Wollaston conducted a series of chemical reactions on this liquid before producing a deep red powder, sodium rhodium chloride, RhCl6Na3.12H2O, which gave a black, flaky precipitate of rhodium when treated with zinc. (1)

The element name comes from the Greek word ‘rhodon’ meaning rose. Wollaston chose this name because of the rose color of a dilute solution of rhodium’s salts.

1803 was a good year for William Wollaston. Not only did he discover rhodium, he also discovered another platinum group metal – palladium.

Catalyst for ethanol oxidation: platinum-rhodium clusters on a surface of tin dioxide. This catalyst can split the carbon-carbon bond and obtain energy from ethanol in fuel cells. Image by BNL. (3)

Rhodium is considered to be non-toxic. Some of its compounds are highly toxic and carcinogenic.

It is highly reflective and extremely resistant to corrosion.

It is not attacked by most acids.

When present in compounds, rhodium exists mostly in the trivalent state, Rh3+.

The majority of rhodium is used as a catalyst in catalytic converters. It is also used to catalyze industrial processes.

Rhodium is used as an alloying agent for hardening and improving the corrosion resistance of platinum and palladium.

As a result of its low electrical resistance, low and stable contact resistance, and its stability against corrosion rhodium is used as an electrical contact material.

The metal is used in jewelry and for decorations.

Abundance and and Isotopes

Source: Rhodium occurs in small quantities in ores metals such as platinum, palladium, nickel, silver, and gold. Commercially, it is obtained as a byproduct of refining nickel sulfide ores from Canada.

Isotopes: Rhodium has 24 isotopes whose half-lives are known, with mass numbers from 94 to 117. Naturally occurring rhodium consists of its one stable isotope, 103Rh.