The chemical element gold is classed as a transition metal. It has been known since ancient times. Its discoverer and discovery date are unknown.

Two faces of gold: Nasa message to aliens carried by the Voyager spacecraft and, on the right, a pirate treasure coin.

Gold artifacts from 4500-4000 BC found in Varna, Bulgaria. Image: Yelkrokoyade. 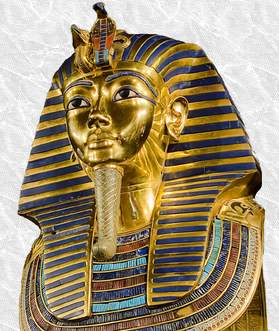 The famous mask of Tutankhamun, made over 3300 years ago in 1323 BC. Ancient Egyptians had been working with gold for at least 1700 years before this mask was made.

Front and back of a coin from King Croesus’s mint – one of the first coins minted in human history, over 2500 years ago. Croesus’s refinery produced gold of consistent quality, allowing gold coins of equal value to be minted.
Image: Classical Numismatic Group, Inc.

Humans have known gold and treasured it since prehistoric times.

Who discovered gold? We do not know, it was discovered before there were written records. We know there is a good chance the discoverer found it in a river bed.

Gold is usually associated with rocks such as quartz and pyrites. As these rocks undergo weathering or erosion by water, the gold can be washed into rivers allowing people to find it easily.

Gold artifacts dated to 5000 years ago have been found in Egyptian tombs; gold was already being beaten into sheets, foil and wire in Egypt at this time. (2) The Egyptian word for gold was ‘nub’ and is related to Nubia, the land south of Egypt where much of Egypt’s gold was obtained.

Gold in the native state (i.e. found naturally) is usually mixed with other metals, such as silver. Its purity can be increased by depletion guilding or refining – a significant step forward in technology. (3)

Analyses of gold from ancient Egypt indicates refining began there about 2500 years ago. (6)

Gold became the basis of money in many ancient civilizations, and even today most countries maintain large reserves of gold for financial credibility. Most modern currencies, however, are not tied to gold as they were in the days of the Gold Standard, described by economist John Maynard Keynes as “a barbarous relic.” (9)

In ancient times people viewed gold as the perfect substance. Alchemists began a relentless but fruitless pursuit spanning many centuries, trying to discover how to transform other metals into gold.

Although alchemy failed in its goal, the experimental techniques alchemists developed were important to the early chemists.

Alchemists believed gold was made of a mixture of perfectly purified mercury and sulfur, mixed in the perfect proportions. (10)

Constant failure to produce gold simply meant substances were not yet pure enough, or the perfect proportions had not yet been found.

The word ‘gold’ is an Anglo-Saxon word, similar to the Anglo-Saxon word for yellow, ‘geolo.’ It is believed to have come from the Sanskrit ‘jval’ meaning ‘to shine.’ (10)

The chemical symbol Au comes from ‘aurum’ the Latin word for gold. (Aurora was goddess of dawn or the morning glow.) (11)

Molten gold is formed into gold bars and cooled. 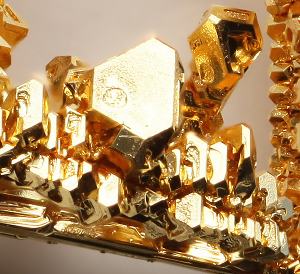 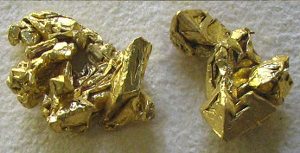 Gold is considered to be non-toxic.

Gold is an excellent conductor of heat and electricity.

It is a soft, yellow metal with a beautiful lustrous sheen. It is the most malleable and ductile of all the elements and a single gram can be beaten into a one square meter sheet of gold leaf.

Gold is unaffected by air, water, alkalis and all acids except aqua regia (a mixture of hydrochloric acid and nitric acid) which can dissolve gold. Gold does react with halogens. It will, for example, react very slowly with chlorine gas at room temperature to form gold chloride, AuCl3. If gold chloride is heated gently, it will decompose to release the pure elements again.

Unusually for a metal, gold can also form compounds (aurides) in which its oxidation number is negative (-1). For example, gold can combine with cesium to form cesium auride, CsAu, and rubidium to form rubidium auride, RbAu. These are ionic compounds with non-metallic properties in which the Cs or Rb ions are charged +1 while the Au atoms are charged 1-.

Gold is widely used in jewelry and coinage. It is also used in dental work as crowns, as gold plating for decoration and as gold thread in embroidery work. The gold content in alloys is usually measured in carats (k), with pure gold defined as 24k.

Many satellites carry gold-coated mylar sheets as a solar heat shield because gold is an excellent reflector of radiation and unreactive. Similarly astronaut’s helmet visors are coated with a thin layer of gold to guard against dangerous effects of solar radiation.

The isotope 198Au, with a half-life of 2.7 days, is used for treating cancers – especially of the bladder, cervix, and prostate.

Gold flake is added to some gourmet sweets and drinks.

Chloroauric acid (HAuCl4) is used in photography for toning the silver image.

Source: Gold is found underground and in rivers. The river deposits arise when gold that was rock-bound is released by erosion of the surrounding rock by running water.

Gold is usually found as a metal alloyed to some degree with silver or sometimes with mercury as an amalgam. Gold nuggets found on Earth range from sizeable nuggets through tiny grains in alluvial (river) deposits to microscopic pieces in rocks.

Commercially, gold is purified by cyaniding, amalgamating with mercury, or smelting processes. Further refining, which produces nearly pure gold, is usually by electrolysis.

Isotopes: Gold has 35 isotopes whose half-lives are known, with mass numbers 171 to 205. Naturally occurring gold consists of its one stable isotope, 197Au.