The chemical element fluorine is classed as a halogen and a nonmetal . It was discovered in 1813 by Humphrey Davy.

The fluoride ion, from the element fluorine, inhibits tooth decay. 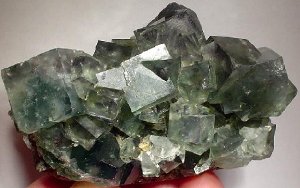 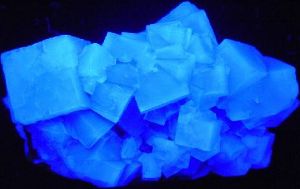 The same fluorite crystals fluorescing in darkness after exposure to light. The phenomenon of fluorescence was given its name because it was first observed in fluorite. Actually, the glow does not come from fluorine but from small amounts of europium in the fluorite. Photo Credits: Rob Lavinsky, iRocks.com

In 1530, German mineralogist Georgius Agricola described the use of the mineral fluorspar in metal refining. Fluorspar (which we now know is mainly calcium fluoride) was very useful because it combined with the unwanted parts of metal ores, allowing the pure metal to flow and be collected.

Often they produced what they called fluoric acid – now named hydrofluoric acid – a highly reactive and potentially deadly acid. Even small splashes of this acid on skin can be fatal.(2)

Several early attempts to isolate fluorine led to blindings and fatalities. English chemist Humphrey Davy wrote: “[fluoric acid] is a very active substance, and must be examined with great caution.(1)

In 1809, French scientist Andre-Marie Ampere proposed that fluoric acid was a compound of hydrogen with a new element. He exchanged letters with Humphry Davy, and in 1813 Davy announced the discovery of the new element fluorine, giving it the name suggested to him by Ampere.

Davy wrote: “… it appears reasonable to conclude that there exists in the fluoric compounds a peculiar substance, possessed of strong attractions for metallic bodies and hydrogen… it may be denominated fluorine, a name suggested to me by M. Ampere.” (1)

Fluorine was finally isolated in 1886, by French chemist Henri Moissan – whose own work was interrupted four times by serious poisoning caused by the element he was pursuing.(3)

To limit corrosion he carried out his work in a platinum container and cooled the electrolytic solution in it to -23 oF (-31 oC.) The stoppers were made out of fluorite (a more modern name for our old friend fluorspar, which we began this section with). Fluorine was produced at the positive electrode.(3)

Henri Moissan received the 1906 Nobel Prize in Chemistry for his achievement.

Fluorine gas, when it contacts other chemicals, results in flames.
Fluorine gas is so reactive that when it flows onto a brick, the brick ignites!

Fluorine is highly toxic and corrosive.

Fluorine is the most reactive and the most electronegative of all the elements.

Fluorine is a pale yellow, diatomic, highly corrosive, flammable gas, with a pungent odor. It is the lightest halogen.

It reacts violently with water to produce oxygen and the extremely corrosive hydrofluoric acid.

Fluorine and its compounds – mostly uranium hexafluoride – are used in processing nuclear fuel.

Fluorochemicals, including many high-temperature plastics such as Teflon, are also made using fluorine.

Compounds of fluorine, including sodium fluoride, are used in toothpaste and in drinking water to prevent dental cavities.

Hydrofluoric acid can dissolve glass and is used to etch the glass in light bulbs and in other products.

Chlorofluorocarbons (CFCs) were used in as refrigerants in air conditioning units and freezers but they have now been banned because they contribute to ozone depletion.

Source: In nature, fluorine occurs mainly in the minerals fluorspar (CaF2) and cryolite (Na3AlF6). Commercially, production of fluorine involves the electrolysis of a mixture of molten potassium fluoride and hydrofluoric acid. Fluorine gas forms at the anode, and hydrogen gas at the cathode.

Isotopes: Fluorine has 11 isotopes whose half-lives are known, with mass numbers 15 to 25. Naturally occurring fluorine consists of its one stable isotope, 19F.