The chemical element uranium is classed as an actinide metal. It was discovered in 1789 by Martin Heinrich Klaproth.

Uranium was formally discovered in 1789, in Berlin, Germany by Martin Heinrich Klaproth.

Klaproth was studying the mineral pitchblende, which was then believed to be a zinc/iron ore.

He named it after the recently discovered planet Uranus.

Below are photos of uranium ore (left) and uranium oxides in sample tubes. These oxides, known as yellowcake, are formed during the purification of uranium ores.

The oxidation states of uranium. 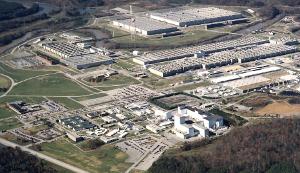 A neutron collides with a U-235 atom. U-236 forms briefly before it undergoes nuclear fission; this yields new atoms plus energy plus more neutrons. These newly released neutrons can cause more U-235 to split. If U-235 atoms are present in high enough concentrations, a nuclear chain reaction results. Image by Fastfission.

Uranium is a dense, silvery-white, slightly paramagnetic, radioactive metal. It is also ductile and malleable. The metal tarnishes in air acquiring a dark layer of oxide. When finely powdered, uranium ignites spontaneously in air.

Uranium is a highly reactive metal and reacts with almost of all the nonmetallic elements and many of their compounds. It dissolves in acids, but it is insoluble in alkalis.

All isotopes of uranium are radioactive, some more so than others. Its radioactivity – in particular its capacity to undergo thermonuclear chain reactions – has led to uranium’s use in energy generation, both for civilian and military purposes.

Uranium is used as fuel for nuclear power plants. One kilogram of uranium-235 has the capacity to produce as much energy as 1,500,000 kilograms (1,500 tonnes) of coal.

Naturally occurring uranium is over 99% U-238 with only about 0.7% of the fissile U-235. Huge gas diffusion plants are used to produce enriched uranium, which has higher concentrations of U-235.

Uranium for use in nuclear power plants is enriched to a U-235 concentration of 2-3%.

In nuclear weapons, it is believed uranium is enriched to about 90% U-235, although lower concentrations would still yield a working bomb.

Depleted uranium is a byproduct of enriching uranium for nuclear purposes. It contains about 0.2% U-235 and is about half as radioactive as naturally occurring uranium.

Its lower radioactivity has allowed depleted uranium to be used in applications where uranium’s very high density is useful. (A tennis ball sized sphere of uranium would weigh about 5.7 pounds (2.6 kilograms).) It is used by the military as shielding to protect army tanks, and also in parts of bullets and missiles.

Use of depleted uranium in missiles is controversial because, on impact, uranium vapor and dust form and these are highly toxic.

U-238 can be converted into fissionable plutonium in breeder reactors.

Abundance solar system: 1 part per billion by weight, 4 parts per trillion by moles

Source: Uranium occurs naturally in several minerals such as uraninite (uranium oxide), carnotite and autunite. Canada is the world’s largest supplier of uranium, producing 20 to 30 percent of supplies. Commercially, uranium is produced through the reduction of uranium halides with alkali earth metals. Although most people think uranium is extraordinarily rare, it is in fact more abundant than familiar elements such as mercury and silver.