The chemical element copper is classed as a transition metal. It has been known since ancient times. Its discoverer and discovery date are unknown.

A nugget of natural, native copper with imbedded copper minerals

Of all the metals, copper is the one most likely to be found in its native state, often released by the chemical reaction of its ores.

Although only small amounts of native copper can be found, there was enough of it for our ancestors to discover the metal and begin using it.

Copper has been used by humans for as many as ten thousand years. Beads made from native copper dating from the eighth millennium BC have been found in Turkey. (1)

Crucibles and slags found in Europe suggest that smelting of copper (producing the metal from its ores) took place in the fifth millennium BC.

Copper mining and smelting were commonplace by 4500 BC in the Balkans – Bulgaria, Greece, Serbia and Turkey. (2), (3)

The Copper Age sits between the Neolithic (Stone) and Bronze Ages. It took place at different times in different cultures, when people began using copper tools alongside stone tools.

The Copper Age was followed by the Bronze Age, when people learned that by adding tin to copper, a harder metal that is also more easily cast was formed. Again this happened at different times in different locations in the world.

The word copper is derived from the Latin word ‘cuprum’ meaning ‘metal of Cyprus’ because the Mediterranean island of Cyprus was an ancient source of mined copper. 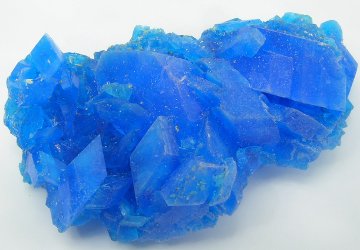 Copper compounds burn with a distinctive green flame. This is copper (I) chloride.
Copper metal is extracted from an acidic solution of copper nitrate. 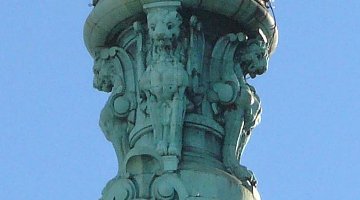 Copper is essential in all plants and animals. Excess copper is, however, toxic.

Cooking acidic food in copper pots can cause toxicity. Copper cookware should be lined to prevent ingestion of toxic verdigris (compounds formed when copper corrodes).

Copper is a reddish orange, soft metal that takes on a bright metallic luster.

It is malleable, ductile, and an excellent conductor of heat and electricity – only silver has a higher electrical conductivity than copper.

If water and air are present, copper will slowly corrode to form the carbonate verdigris often seen on roofs and statues.

As a result of its excellent electrical conductivity, copper’s most common use is in electrical equipment such as wiring and motors.

Because it corrodes slowly, copper is used in roofing, guttering, and as rainspouts on buildings.

It is also used in plumbing and in cookware and cooking utensils.

Commercially important alloys such as brass and bronze are made with copper and other metals.

Copper sulfate is used as a fungicide and as an algicide in rivers, lakes and ponds.

Copper oxide in Fehling’s solution is widely used in tests for the presence of monosaccharides (simple sugars).

Source: Copper is occasionally found native (i.e. as the uncombined metal), and is also found in many minerals such as the oxide; cuprite (Cu2O), the carbonates; malachite (Cu2CO3(OH)2)and azurite (Cu2(CO3)2(OH)2) and the sulfides; chalcopyrite (CuFeS2) and bornite (Cu5FeS4).

Most copper ore is mined or extracted as copper sulfides. Copper is then obtained by smelting and leaching. Finally, the resulting crude copper is purified by electrolysis involving plating onto pure copper cathodes.

Isotopes: Copper has 24 isotopes whose half-lives are known, with mass numbers 57 to 80. Naturally occurring copper is a mixture of its two stable isotopes, 63Cu and 65Cu, with natural abundances of 69.2% and 30.8% respectively.