The chemical element bismuth is classed as an other metal. It was discovered in 1753 by Claude Geoffroy the Younger. 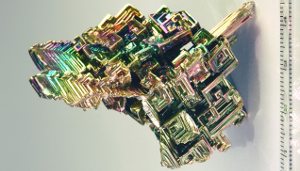 A crystal of bismuth. The colors come from light interference in a thin oxide layer on the surface of the crystal. Image Ref. (1)

Bismuth has been known since the fifteenth century.

In 1753, French chemist Claude Geoffroy the Younger established that it was an element in its own right rather than a form of lead.

Bismuth is considered to be stable, although it is actually radioactive with an extremely slow rate of decay.

If precisely 100 grams of bismuth-209 had been present at the beginning of the universe 14 billion years ago, about 99.9999999 grams of it would still be around today.

The name bismuth is probably a latinized version of the old German word for bismuth ‘weissmuth’ meaning ‘white substance’, possibly named after its white oxide.

Bismuth is not known to be toxic.

Bismuth is a crystalline, brittle, metal. Lying on the right side of the periodic table, bismuth is the most naturally diamagnetic metal; this means it resists being magnetized and is repelled by a magnetic field. One effect of this can be seen in the video (left).

Bismuth also has unusually high electrical resistance for a metal. Its thermal conductivity is lower than any metal, except mercury.

Bismuth has the unusual property that (like water) it expands as it freezes. Four other elements expand when they freeze: silicon, gallium, antimony and germanium.

Isotopes: Bismuth has 33 isotopes with mass numbers ranging from 185 to 217. Of these only 209Bi is considered to be effectively stable, although it is actually radioactive with an extremely slow rate of alpha particle decay: its half-life is 1.9 x 1019 years. If precisely 100 grams of 209Bi had been present at the beginning of the universe 14 billion years ago, 99.9999999 grams of it would still be around today.