The chemical element indium is classed as an other metal. It was discovered in 1863 by Ferdinand Reich. 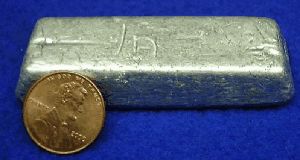 A bar of indium metal and a penny.

In 1863, Ferdinand Reich discovered indium in Germany. He had intended to investigate whether zinc sulfide ore (sphalerite) also contained thallium. Instead, as a result of his careful observations, he became the discoverer of a new element. (1)

After roasting the ore to remove most of the sulfur, he decomposed the remaining material with hydrochloric acid.

He saw a straw colored solid appear. Reich began to suspect that this straw colored precipitate might be the sulfide of a new element. (2)

He investigated this further by getting an emission spectrum for the sample. Unfortunately for Reich, his color-blindness prevented him from accurately interpreting this for himself.

He asked his countryman, German chemist Hieronymus T. Richter, to look at the flame colors produced. Richter observed a brilliant indigo line, which did not match the spectral line of any known element. (3)

This line enabled Reich and Richter to show that a new element was present in their sample.

The men later isolated the metal by a lengthy series of precipitations and made a thorough study of its properties. The yield of indium was 0.1% from the original zinc sulfide ore. (1)

The element was named after its characteristic spectral line – the ‘indi’ coming from the color indigo.

Indium in a test tube. Photo by Schtone.

When indium is added to gallium nitride in LEDs, violet, blue and green colors can be produced. Image by LBL

Indium sits in Group 13, Row 5 of the periodic table. Its neighborhood contains a number of low-melting point metals.

Indium is considered to be of low toxicity.

Indium liquid clings to or wets glass and similar surfaces.

Like gallium, indium remains in a liquid state over a wide range of temperatures.

When present in compounds, indium exists mostly in the oxidation state III.

When heated above its melting point, it burns with a violet flame to the yellow sesquioxide (In2O3).

Indium is used in the production of low-melting alloys, typically with gallium.

The melting point depends on the ratio of indium to gallium.

This type of alloy can be used as a non-toxic alternative to mercury in some applications.

Compounds of indium are used in the semiconductor industry for germanium transistors, thermistors, rectifiers and photocells.

Indium can be coated on metals and evaporated onto glass, to form mirrors equal to that made with silver but more corrosion resistant.

Abundance solar system: 4 parts per billion by weight, 40 parts per trillion by moles

Source: Indium has no minerals or ores with a high concentration of the element. Commercially, indium is extracted as a by-product of zinc refining. It is also extracted from iron, lead, and copper ores.