The chemical element praseodymium is classed as a lanthanide and rare earth metal. It was discovered in 1885 by Carl Auer von Welsbach.

Praseodymium was first identified in 1885, in Vienna, by Austrian scientist Carl Auer von Welsbach. It was discovered in ‘didymium’ a substance incorrectly said by Carl Mosander to be a new element in 1841. (1)

Bohuslav Brauner working in Prague, published a paper on atomic weight determinations in 1882 for rare earth elements and his data for ‘didymium’ were variable. Brauner became convinced that ‘didymium’ was a mixture of elements; he attempted to separate them, but he was not successful. (2)

In 1885 Carl Welsbach, who had discovered ‘didymium’ 14 years earlier, realized it was actually a mixture of two entirely new elements. He named these praseodymium and neodymium. Welsbach reacted ‘didymium’ to form nitrate salts, which he then fractionally crystallized from nitric acid to yield greenish-brown praseodymium and pink neodymium salts. 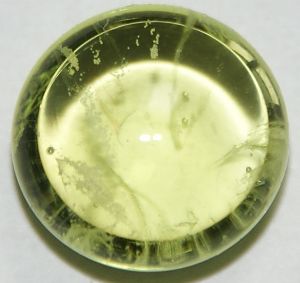 Praseodymium is considered to be moderately toxic.

Praseodymium is one of the lanthanide rare earth metals.

It forms a flaky black oxide coating (Pr6O11) in air. Unlike many metal oxide layers, this one does not protect the metal from further oxidation. The pale green sesquioxide, Pr2O3, is not stable in air. (4)

Praseodymium usually exists as a trivalent ion, Pr3+, in its compounds. Most of its salts are pale green in color.

Praseodymium is used in high-intensity permanent magnets, which are essential in electric motors and generators used in hybrid cars and wind turbines.

The metal is used as an alloying agent with magnesium creating a high-strength metal for aircraft engines.

Praseodymium salts are used to color glasses and enamels.

Praseodymium is also used in the core of high-intensity carbon arc lights used by the film industry and in floodlighting.

Abundance solar system: 1 part per billion by weight, 5 parts per trillion by moles

Source: Praseodymium is not found free in nature but is found in a number of minerals mainly monazite and bastnaesite. It is recovered commercially by ion exchange techniques and counter-current liquid-liquid extraction processes from monazite sand and bastnaesite. Praseodymium metal can be prepared by reduction of the anhydrous chloride.

Isotopes: Praseodymium has 32 isotopes whose half-lives are known, with mass numbers 121 to 154. Naturally occurring praseodymium consists of its one stable isotope, 141Pr.