The chemical element curium is classed as an actinide metal. It was discovered in 1944 by Glenn T. Seaborg, Ralph A.James, and Albert Ghiorso. 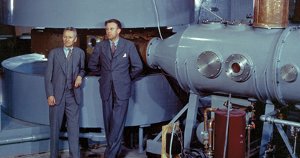 The Berkeley Lab’s 60-inch cyclotron, where atoms of curium were synthesized for the first time. Ernest Lawrence, the cyclotron’s inventor, is on the right.

Curium was the third synthetic transuranium element of the actinide series to be discovered.

It was discovered by Glenn T. Seaborg, Ralph A.James, and Albert Ghiorso in 1944.

Curium-242 (half-life 162.8 days) was produced by bombarding plutonium-239 with alpha particles in the Berkeley, California, 60-inch cyclotron. Each nuclear reaction produced a neutron in addition to an atom of curium-242. (1)

The element was chemically identified at the metallurgical laboratory at the University of Chicago.

The researchers at first referred to curium as ‘delirium’ owing to the difficulties they encountered trying to isolate it from another new element with which it was very closely associated, americium – or ‘pandemonium’ as it was first called.

Visible amounts of curium-242, in the form of curium hydroxide, were first isolated by Louis Werner and Isadore Perlman of the University of California in 1947. Curium-242 was produced by bombarding americium-241 with slow moving neutrons for a year. (2)

The element is named after Marie and Pierre Curie, who pioneered work on radioactivity and discovered radium and polonium.

The Alpha Particle X-Ray Spectrometer (APXS) used on the Mars Exploration Rovers. It uses small amounts of curium-244 to determine the concentrations of most major elements in rocks and soil.(Photo credit: NASA)

Curium is harmful due to its radioactivity. It accumulates in bones and destroys the marrow, stopping the formation of red blood cells.

Most compounds of trivalent curium are slightly yellow in color.

Curium is highly radioactive and it glows red in the dark. (4)

Curium-244 was used in the Alpha Proton X-ray Spectrometer (APXS) which measured the abundance of chemical elements in rocks and soils on Mars.

Curium-244 is a strong alpha emitter and is being studied as a potential power source in radioisotope thermoelectric generators (RTGs) for use in spacecraft and other remote applications.

Source: Curium does not exist in nature. It is a synthetic element and it is produced in nuclear reactors by bombarding plutonium with neutrons.